Ghost of Fort Christmas
(or what is in that picture?)

Ghost or something on a visit to Fort Christmas

Well I do not believe in ghosts.

I just don't and that is despite the fact that I took a photo of a ghost or something.

Don't believe in them despite what my brother and I witnessed as children (and recently brought the subject up after over 30 years of ignoring our shared experience. I was surprised that both of us still recalled our childhood visits-but that is another story)

But like I stated already I don't believe in ghosts, or orbs & have no explanation of the FRED story at KSC. There are explanations for everything-just that I do not yet have the explanation for a few oddities. 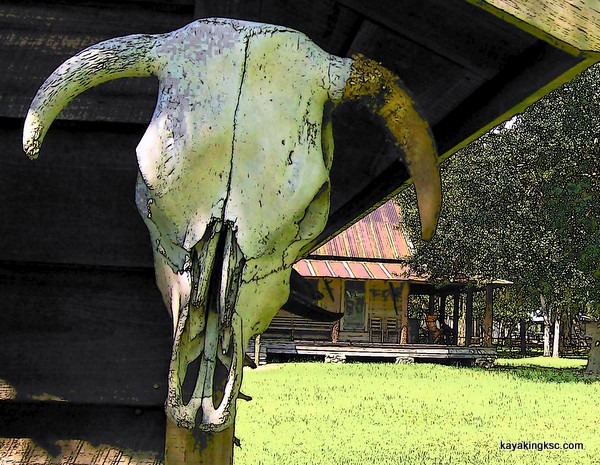 Essentially this page is about that EMPTY chair in the background.

Fort Christmas a few miles west of Kennedy Space Center is a fascinating reproduction of the Second Seminole War fort that had been originally constructed in 1838. 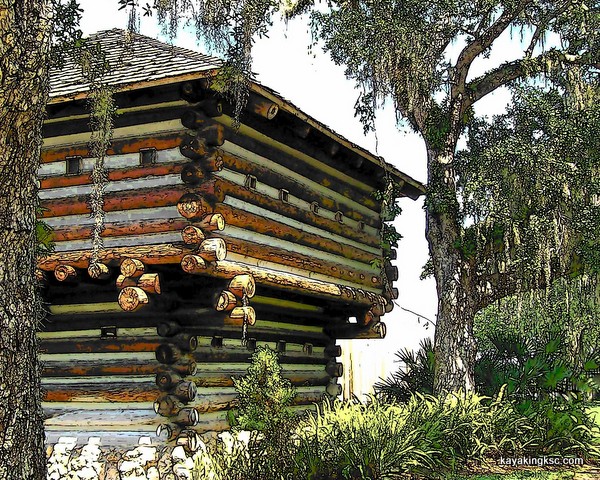 The Museum Curator avoided me.....

So a couple of years ago I was attending a archeology lecture at the local college and the guest speaker introduced a minor celebrity who just happened to be sitting next to me in the audience. (serendipity?)

He was the museum curator at the local Fort Christmas Park.

Fort Christmas a few miles due west of Kennedy Space Center is a fascinating reproduction of the Second Seminole War fort that had been originally constructed in 1838.

For the past 30+ years; old Florida homesteads have been purchased, relocated to the park and stocked with household goods that would have been used to settle Florida after the Great War of Northern Aggression.

The result is a fascinating little village of Cracker houses-a visual representation of Florida's past. 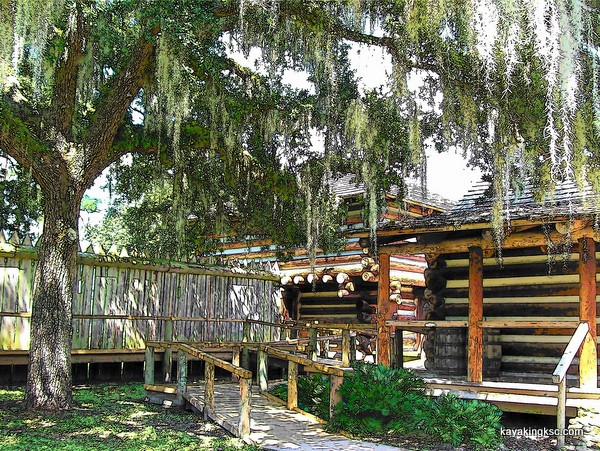 Inside view of the fort

I exchanged greetings with the museum curator. He was very gracious and I rather impishly confided that I had taken a photo of a ghost at his museum.

Impish is the word I chose -because I don't believe in ghosts despite my photo.

However upon mention of my photo rather dramatically the demeanor of the museum curator almost instantly changed! (quick as a ghost your might even say)

A wave of (choose one) dismay, disgust, disappointment washed across his friendly features for I had just moved from the category of amateur historian and placed myself into the category of "those people"

Anyway after the lecture ended and I was at a safer speaking distance (he could flee if required) the curator opened up that his park was often inundated with unique (my word) people from Orlando and other parts of central Florida.

In general, and for reasons I still do not understand; Fort Christmas had become a Mecca of sorts for mediums, spiritualists and ghost hunters from near and far.

Apparently, and if you were the type to believe in such things; a whole gaggle of "??" things had accompanied the collection of old Florida cracker houses in a sort of illegal immigration and gathering of 100+ year old ghosts (for lack of better description) 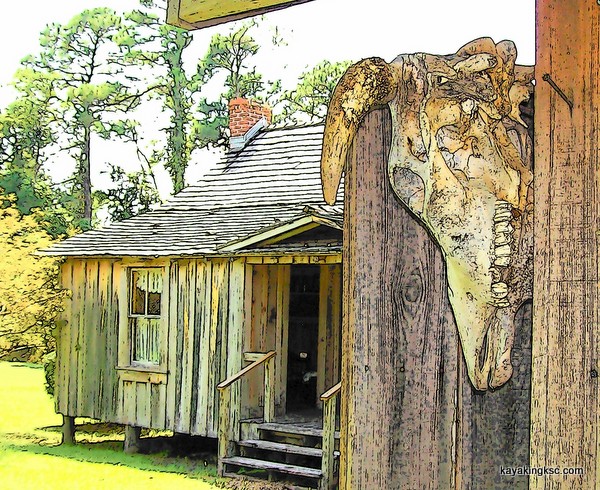 -This surprised me, for I had no idea that Fort Christmas park had been collecting unseen guests & consequently attracting eccentric people who could see strangers in old clothing.

Nevertheless I had to chuckle under my breath because I had photo. A rather odd picture. 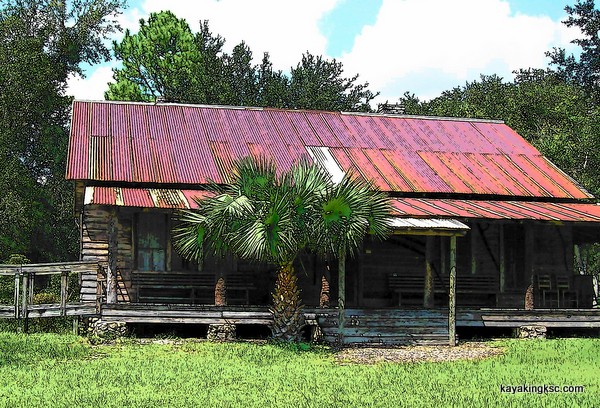 Any thoughts about my photo? No explanation why. It just is.

Mid Florida summer hot and sticky-far too hot to kayak or do anything and so we took a ride to Fort Christmas. I grabbed my point and shoot camera.

We lived close enough that I could return to the park anytime with my good cameras. 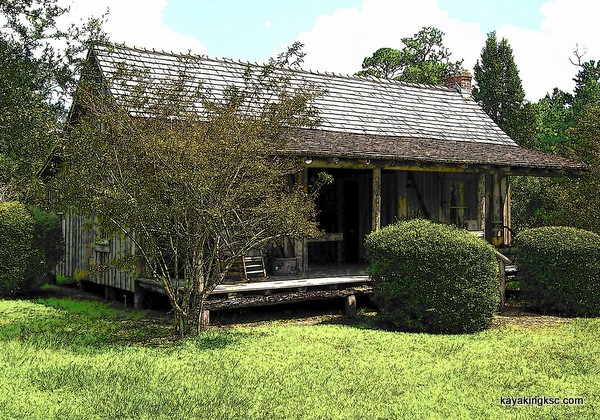 As I walked through this old Florida cracker home I noticed how cold the interior was and commented to myself what a great design the old timers has created-to keep the house cool despite the blistering Florida summer sun.

My wife joined me and we explored the collection of old homes and I took about fifty pictures.

When we arrived home it was still hot outside so I loaded the photos on my computer and began to review them.

Average photos to enjoy but delete at the end of the weekend. 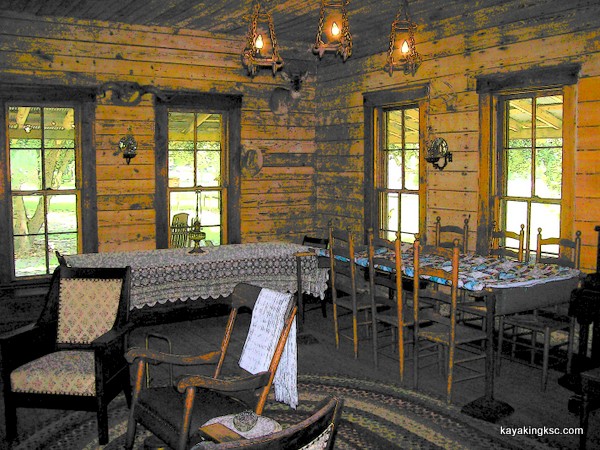 This room had been so cold I was impressed! 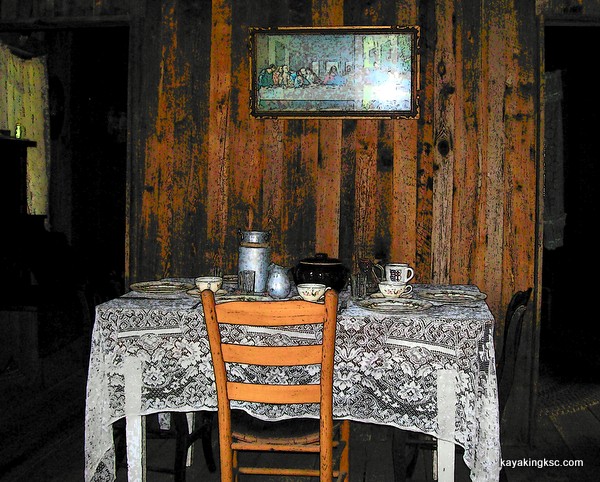 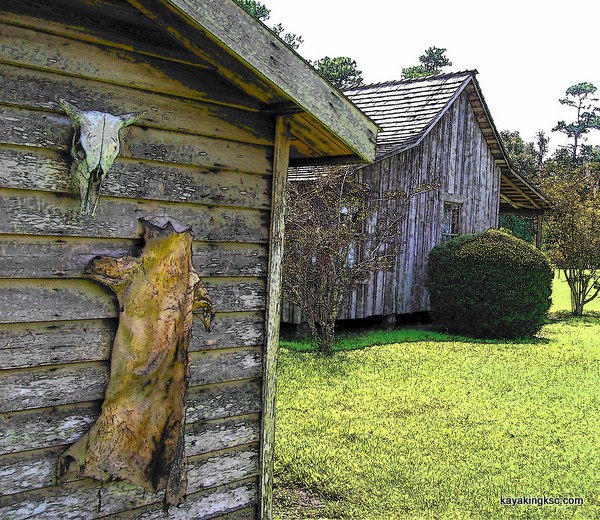 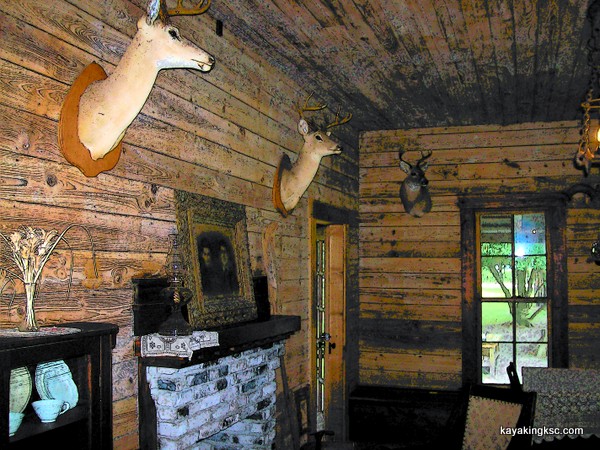 I had scanned about two dozen of my photos when my subconscious began to scream at me -something was wrong about a photo. I had to back up four pictures to find that Wrong photo.

Something was wrong with the picture although I could not quite place the wrongness.

Finally I figured it out and began to laugh!

I had a ghost picture! Or just some odd reflection 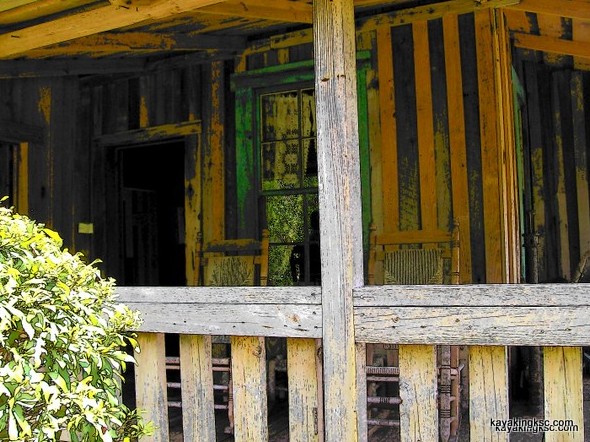 The porch photo that I quickly viewed and moved on to the next picture. However my my subconscious or reptile part of my brain made me return and study the porch.

I would hazard a guess that most folks who look at this photo do not see anything wrong.

In the picture was a quaint little front porch of one of the houses with a glass window and a rocking chair.

I enlarged the photo to full capacity. And indeed in the reflection is the chair and the shrubbery ....and what appears to be the back of the head of the chairs occupant. 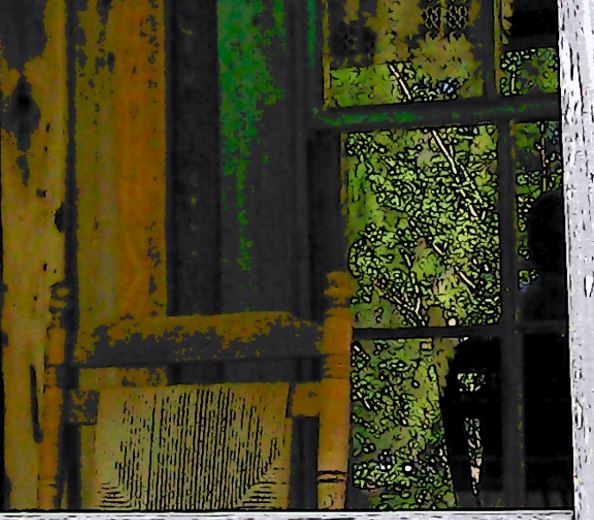 Close up of the reflection.

Rocking chair, shrubbery and the occupant.

And of course the empty rocking chair......? 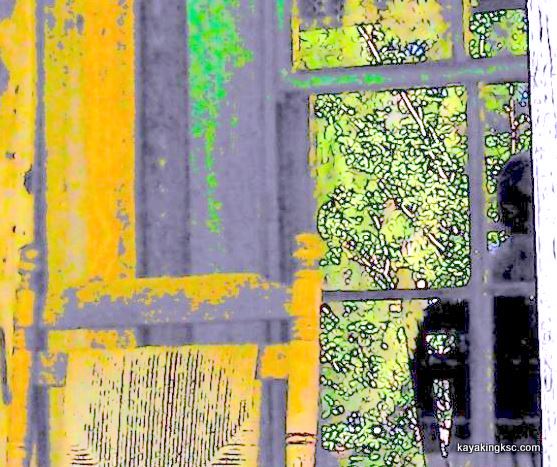 The same snip but using the computer program to increase the lighting in the photo.

Interesting results: Almost as if there is a shirt in the photo.

Don't really want to deem-the chair's occupant a name of ghost or spirit.

Mostly because every thing has a logical explanation.

So I studied the picture very carefully.

**Sure in the photo there is a reflection in the window.

**And the rocking chair on the porch is empty. 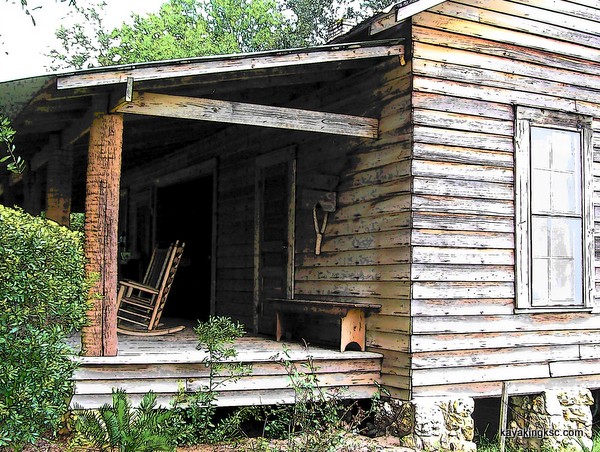 Side view of the porch, empty rocking chair and window

And I have attempted many scenarios to gain a understanding of how this particular reflection/refraction came to be.

Where would an actual (live) person have to be standing to be viewed in the window pane to be sitting in the chair? At what angle?

Note: We were the only two visitors that hot afternoon. So there were not other people around. (Not even the "I see dead people" crowd)

Like I said, I laughed. There is no explanation.

In conclusion, I have not been back, have not returned to the old houses. Not Yet.

Not really any interest in the photos of Fort Christmas and also I don't believe in ghosts so I have not attempted to re-create that particular photo.

-Truthfully I'm just too busy at the other hobbies or work at the Space Center, where the pace is picking up for the moon launches.

Fort Christmas is for me something reserved for hot sticky summer days.

And a good laugh at an unexplained mystery.

Return HOME from the Ghost of Fort Christmas page