The QCC was already loaded, ready for the ten mile drive to the Indian River Lagoon. I grabbed two cameras staged in waterproof bags. This morning’s paddle would be a little different: A space shuttle was blasting off from Launch Pad 39A 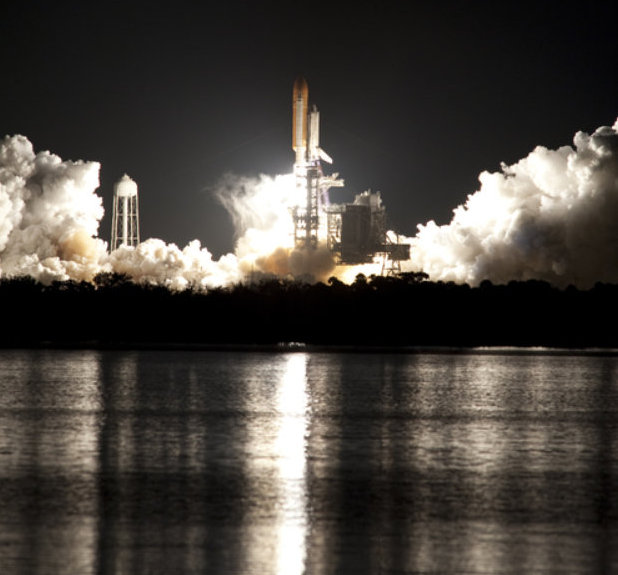 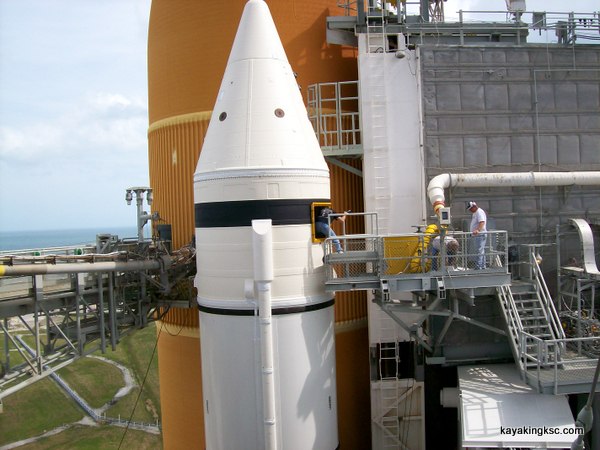 Photo credit: I took this photo.

Pre launch inspection by technicians on the Rotating Service Structure on the launch pad.

The alarm clock screamed at my head and I slapped the alarm off harder than was really necessary.

Mentally, I groaned “Why do I do this?” 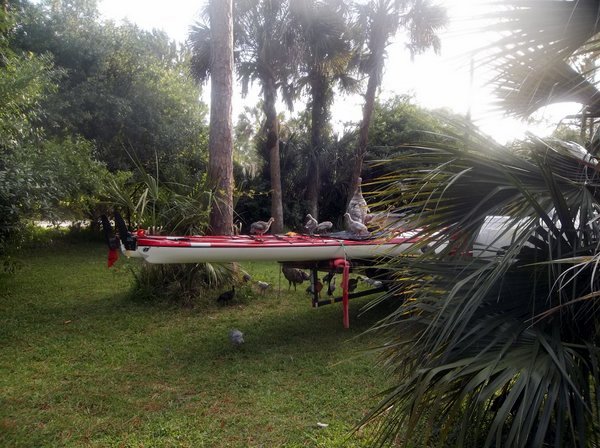 My QCC kayak "pre loaded" the day before.

The QCC was already loaded, ready for the ten mile drive to the Indian River Lagoon. I grabbed two cameras staged in waterproof bags. This morning’s paddle would be a little different: A space shuttle was blasting off from Launch Pad 39A.

Man on the radio garbled that the space shuttle was still counting down to the 6:21 lift off. “Last shuttle night launch ever”

That statement evoked an unusual blend of emotions: sadness at the approaching end of the shuttle program, but excitement about this morning’s pre sunrise launch.

Knowing from past launches, that Kennedy Space Center and the surrounding lagoons would glow bright as daytime when the shuttle boosted the Astronauts towards the International Space Station.

I pulled into the local all night gas station to fill up on gas and a grab a quick cup of coffee. Performed a quick check of my kayak tie down straps while unconsciously gauging the cool north wind in my face and interpreting how conditions would be out on the Indian River.

The automatic monitoring of the sea breezes, observing the waving fingertips of palm fronds and fluttering of flags was an ingrained habit, the result of a windsurfing addiction from a younger time in my life.

“North to North-West wind, perhaps 5- 6 miles per hour”. Not difficult in the QCC, but terrible for shooting quality pictures, perhaps I would have to find an island.

I inserted the fuel nozzle, began pumping gasoline and sipping hot bitter coffee. Not so far away from the gas station, perhaps a mile, the overpass for Highway 528 “The Beachline” jutted above the sand pines.

To my dismay the “Beachline” 528 was a basically a lit up parking lot. 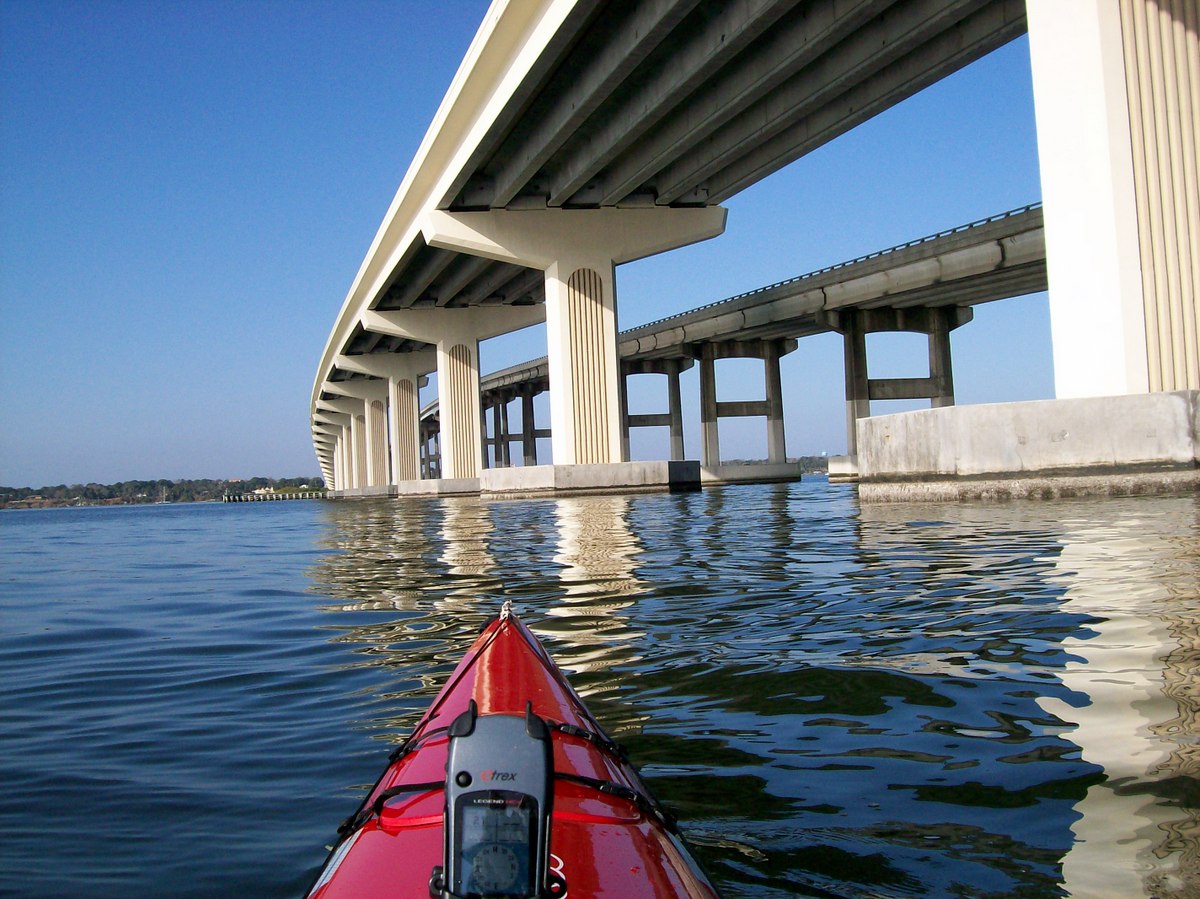 Day time view of the twin bridges of the Beach line causeway, where the police allowed spectators to double park on the bridge to watch the last night launch

Wow had I miscalculated.

Hundreds, probably thousands of cars were packed on the highway. Spectators from Orlando or other central Florida locations were trying to get to the east coast to watch the shuttle lift off.

“Dang it” (or words similar) I had erroneously believed that because the last night launch was on a work day that the usual crowds of shuttle gawkers would be small.

I realized a kayak trip to one of the Manatee Cove islands was now out the question. I would be lucky to make it to the river by daylight. 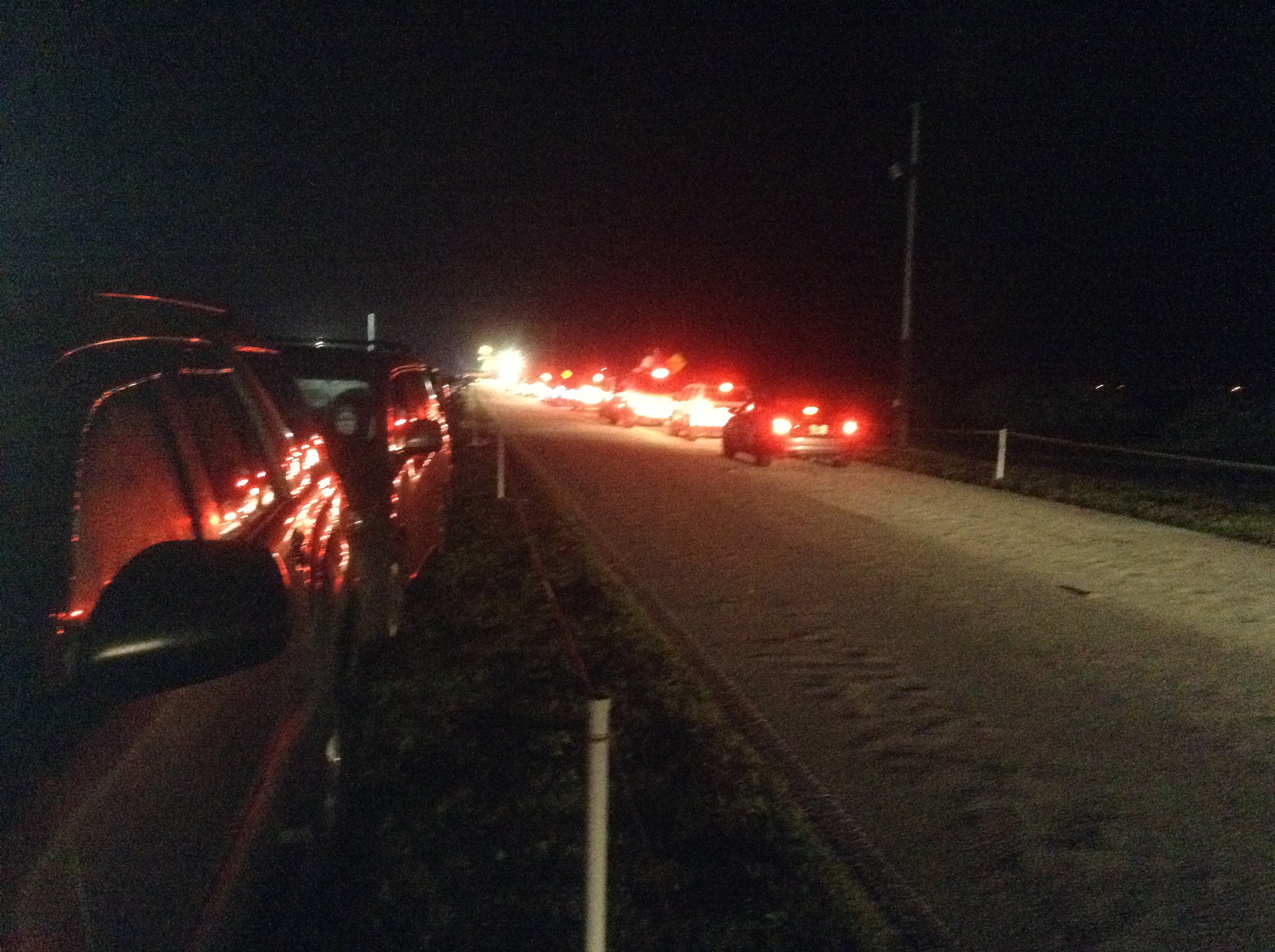 Merging (creeping) into the 528 pre dawn traffic, I could see the bridge over the Indian River and two sets of flashing blue lights parked on the causeway bridge.

Reminded me of the hurricane refugees.

The slow flood of cars heading east resembled the typical aftermath of a hurricane.

At the approach of one of the giant Atlantic storms, thousands of terrified people would use an entire week to migrate west, fleeing the coastal barrier islands.

Then after the storm had swept past Florida or turned inland, -the thousands of anxious residents would all make the attempt to return home at the same time, clogging 528 from the coast to Orlando.

And so it was on this launch morning


“Dang it” (or words similar) as the shuttle traffic crawled towards the river. However the traffic speed began to increase as cars simply began pulling off the road and hundreds of excited people began the mile walk towards the Indian River.

Driving the Beachline the river soon the river came into view, a wide body of silver in the starlight.

To the north east, on Merritt Island, the shuttle pad was lit up by giant spot lights.

So many people had pulled off the road that to my surprise I was shortly going up and then crossing over the causeway bridge; passing the twin flashing blue lights of parked police cars parked.

Becoming somewhat alarmed at the growing crowd of spectators standing on the bridge.

“Dang it” (or words similar) as an unobservant teenager stopped herself from stepping in front of me and more than irritated, I was scared at how little space was available to vehicles that actually wanted to cross the bridge.

The sheriff deputies had allowed people to Double Park on the both sides of the twin causeway bridges!


Then I was off the bridge, heading east on the causeway and searching for a launch spot.

I was totally unprepared to see my normal parking place, with its little shell beach empty!

All of the spectators had jammed the bridges or the north side of the 528 causeway and consequently I had the south side almost to myself.

As on other mornings of pre dawn practice, I quickly unloaded the kayak and suctioned on the night lights. Slipping on my PFD, I pushed the kayak through cool shallow water, dragging my feet, mimicking the “Indian River Stingray shuffle” a common sense maneuver used to scare off any secreted rays waiting in ambush for bait fish.

Settling into the boat and pushing into the lagoon; the silky motion of boat over water erased any and all angst gathered from dealing with the traffic jam and Orlando tourists.

Another superb pre dawn morning on the Indian River I thought, edging west towards the towering bridges; normally shadowed in darkness but this morning crowned with the lights of parked cars and the blue strobes of the sheriffs vehicles.

Approaching the rows of colossal bridge pillars; the moon and flashing lights illuminated the soft rain of fluttering, shimmering falling wrappers and assorted trash that twinkled as it drifted from the brides to the brackish lagoon. Glancing downwind I could see a flotilla of garbage quickly disappearing into the pre dawn darkness. The occasional red lightning bug of a tossed cigarette butt flittered to the water and died.

Paddling almost directly beneath the south bridge, something splashed into the water near me, while far above sounded the cackle of distant laughter. The remote laughter had a slightly manic cant, perhaps beer addled, a reminder that a significant portion of the launch spectators had been up all night celebrating.

The source of the splash, a half submerged plastic water bottle drifted past the boat and I realized I had entered the impact zone for a crowd of drunks!

My small navigation lights might very well be an enticing target for some of the wobbly visitors.

For some ambiguous reason I also found the near miss kind of funny and chuckled to myself, Oh dang, someone could even fall over those low bridge railings.

Releasing the rudder cord, lightly stabbing the foot pedals I put weight into the paddle, having just re-invented the “panic stroke” and shot out from under the twin bridges into the open lagoon and a stiff north wind.

With the lighted bridges behind me, I could once again make out fading stars, the far away lights of the launch pad and an overall brightening in the eastern sky. Checking my watch, I realized I had only 15 minutes to paddle as far as possible from the crowds and prepare for the launch of STS-131.

That traffic jam had cost me valuable paddle time.

Settling into a familiar stroke, the half moon lighting my way, I paddled steadily into the wind.

Suddenly the bridge mob roared with excitement and I was still close enough to recognize individual cries of “The Space Station”.

Right on schedule- 6:06 A.M., the International Space Station, bright as an airplane flew over the horizon moving at roughly 17,000 miles per hour. The Space Station was the target of this morning’s launch, it would take the shuttle Discovery three days to catch up to the orbiting station.

Thoroughly enjoying the sight, and despite the north wind, I held my position for the two minutes the station was visible. The Space Station actually passed through the moon, “So cool” I thought.

Spot the International Space Station over your city (A NASA page)

When the orbiting space craft finally disappeared over the horizon, I continued north crossing the boat channel, passing parked sailboats and a menagerie of other watercraft anchored for the lift off.

Tapping the rudder again, angling east towards the shallow grass flats, the distant sun only a vague promise, the cool early morning was my favorite time of the day. I recalled the three pre dawn mornings on the Missouri River during the MR340. The mornings and the full moon nights were my best memories of that race. Of course the lightning storm was pretty cool……

Somewhere to my front, an unseen animal wetly exhaled and I quickly kicked the rudder hard, holding the paddle steady turning the boat, straining through pre dawn darkness for the sight of a fin of a Bottlenose Porpoise or water boil that would indicate the presence of a Manatee.

Nothing could be seen on the dark water, so I made a course correction to my route and cautiously continued on, trying to determine good location for shuttle viewing.

At three minutes to launch, I pulled out my MP3 and a camera. Inserting an ear bud, I fumbled for the FM station that carried the countdown.

Launch was still on.

The two minute hold came and went and finally the news announcer counted off those words I and thousands of other spectators had been hoping to hear.

“Three, two, one and lift off of Space Shuttle Discovery!”

A bright spark flared to the northeast, the growing in intensity, until like the sun it was painful to stare at. Behind me in the distance, a cheer erupted from all along the mile wide causeway.

“Godspeed and safe travel, friends, reach out to touch the face of God.” I wished upon the crew of the Discovery.

The shuttle slowly lifted off the launch pad climbing toward the stars; riding a fireball of rocket engines that briefly illuminated both the Indian River and Merritt Island Wildlife Refuge as bright as any noon day.

As the early morning darkness changed to afternoon like illumination; families of Porpoises and Manatee exploded in panicked swirls creating enormous splashes and waves. Schools of frightened mullet rippled the water as far as the eye could see.

Frightened birds took flight at the slower sound waves; staccato pulsating mini explosions, building in strength until they were a physical force whose pressure could be felt all over my body. (Yes! That is why I was here!)

The sky slowly faded to its normal pre dawn darkness, and for the next two minutes I watched the shuttle lift then curve over the horizon.

The distant crowd cheered again as the two solid rocket boosters separated from the shuttle. The dawn sun, still hidden from the Indian River shone brightly upon the curving shuttle and falling boosters.

The shuttle curved east until it was only a distant star. I sat enthralled as the shuttle exhaust plume, now a giant rainbow snake spiraled out across the sky, the unseen eastern sun touching the smoke cloud into shades of rose, peach and gold.

The most spectacular launch out of dozens I had seen.

Finally the sun hesitantly peeked over the eastern trees and the Beachline causeway to the south turned into a congested mess as cars tried in vain to merge into the traffic jam.

It would be hours before the Beachline was clear.

I turned my boat north, intent getting in some paddle practice time for a far away race in Missouri