I found the child's hand cast...and it still is laying there on the Indian Mound.

The rules on my Free Merritt Island Wildlife Area fishing permit state that items will not be collected, and so that is so. Both the pot sherds (shards) and the hand cast are still there for anyone to see. For anyone to take photos & to ponder the mystery and sadness, yes sadness. 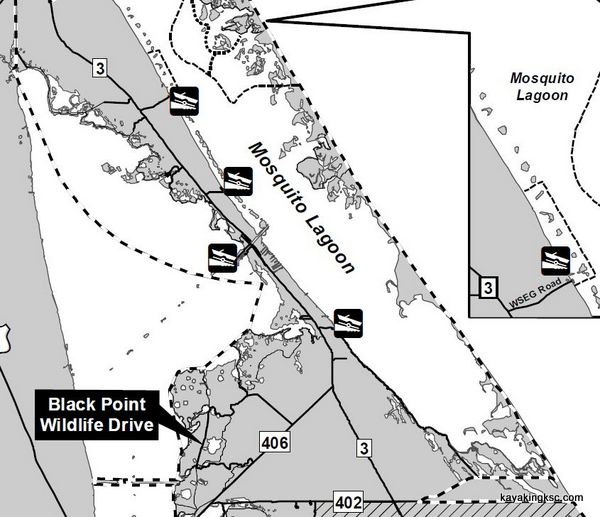 When leaving work at the space center & driving north; I can be at Mosquito Lagoon in as little at ten minutes!

Mosquito Lagoon, the wildness of the lagoon is addictive and soothing, the massive lightning storms invigorating. The seclusion and peacefulness might only be matched by the remote Glacier National Park or perhaps the wind swept San Juan Islands.

However Mosquito Lagoon is in my back yard and world famous for the redfish fishing & thankfully no one talks about the abundant juvenile tarpon.

When leaving work at the space center I can be at Mosquito Lagoon in as little as ten minutes, casting at my "Go to spot" on those days when I do not bring a boat. 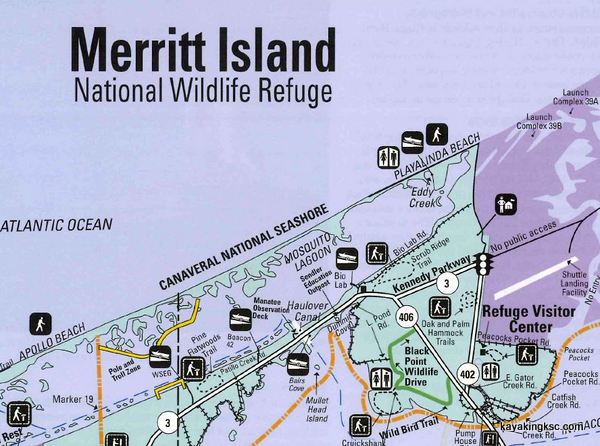 It was on Biolab road on the Lagoon, bank & wade fishing that I found the Indian mound/midden and the hand print.

My favorite bank fishing spot:  Many years ago the very first thing I noticed was all the native American pot sherds (shards) in mud along the Lagoon. One spot in particular had huge shards of broken pottery in the mud.

However the artifacts at my fishing spot on Biolab Road are different.

The sections of Indian pottery are broken into quarter and nearly half size of the original pots. With very little imagination the sherds could be easily reassembled.

For years the large & intact pot sherds were just a curiosity-they were covered during high water times and exposed when the lagoon water levels dropped.

However my goal after all was not the artifacts but the abundant sea trout and redfish.

However after one of recent algae bloom fish kills, the fish were not biting (or alive) & I turned my attention to the pot sherds and actually ventured into the trees.

To my surprise there was a vast shell midden and ruins of a house that were invisible from the lagoon. 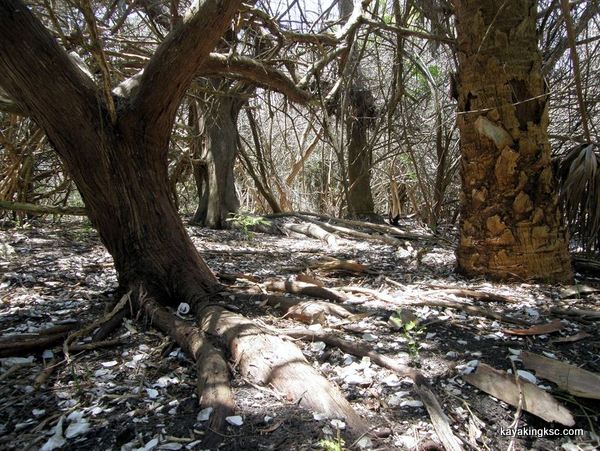 Inside the tree line wan an expansive shell midden/mound.

I later measured the mound to be over two hundred yards long.

(For those out of country readers-say those trapped in the New Union of Soviet Socialist Republics (Known as The European Union)....a "yard" is a unit of measurement equal to a full grown person's step. In fact, a Yard is sometimes divided into three. A concept known as the foot. Hence the confusion between the games Football and Football-depending upon which side of the Atlantic one resides)

Mosquito Lagoon despite the wildness is not lacking in signs of human habitation.

To the south can be seen launch pads jutting above the Florida horizon.

Ancient fishing docks extend into the lagoon and as mentioned at every high spot are Ais Indian mounds and shell middens.

Despite the horrendous salt marsh mosquitos that plague the shoreline; generations of people have feasted, lived and loved upon the bountiful shores of Mosquito Lagoon.

While casting my gold spoon into the lagoon I had often wondered: Had the Ais Indians dropped their pots into the mud when fleeing for their life in the family canoe?

The peaceful lagoon gives little hints of the forced migrations of people "away" from the productive waters.

The Ais Indians, perhaps the original inhabitants of the lagoon were forced to move south to escape the slave raiding Carolina Indians who marched most of the original Florida inhabitant north in chains to sell in Charles-Town.

A hundred years later the Americans began their invasions and wars to restrict and remove the southeastern Indians who had migrated into a nearly empty Florida. 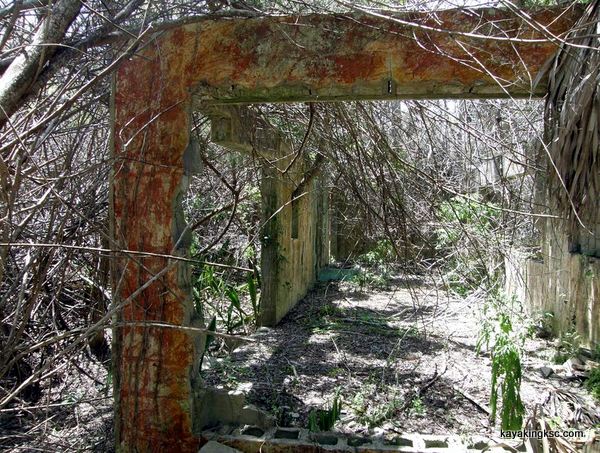 (Unexpected Ruins on top of the shell mound)

I marveled at the ruins & recalled my childhood explorations of the abandoned Weldon Springs Yellow Cake factory in Missouri.

Then a the height of the cold war and the beginning of the space race, the Americans themselves were forced away from the Mosquito Lagoon to create Kennedy Space Center.

Full-scale panic ensured when on October 4, 1957 when the Russians launched Sputnik 1, the world's first artificial satellite.

The Space Race had begun in earnest & on July 29, 1958, President Eisenhower signed the National Aeronautics and Space Act, establishing NASA.

The creation of NASA doomed the mosquito bitten residents of east coast of Florida.

In a series of eminent domain land grabs the United States government secured the jewel of the east coast: The southern end of Mosquito Lagoon & huge sections of Cape Canaveral and north Merritt Island to create the New Kennedy Space Center.

Once again, generations of people were forced from the shores and farms of the lagoon. As with the other forced migrations, the powerful looked on with a gracious smile, a smile that was backed by guns.

Homes were burned or trucked away from the new Government owned land.

20,000 acres stolen from the local farmers at gunpoint by the Gov.

Ok, forgive my wandering thoughts. However the story of forced migrations does relate to the mysterous hand print.

Back to the present and the mystery hand print....

Under cedar and Brazilian pepper trees was a shell mound as far as I could see. The mound formed a ridge nearly ten feet higher than the lagoon shoreline.

And interestingly enough, the space center feral hogs had plowed up the entire mound. Thousands of oyster, clam and whelks shells, shell tools and pot sherds had been plowed over and over by the wild pigs. 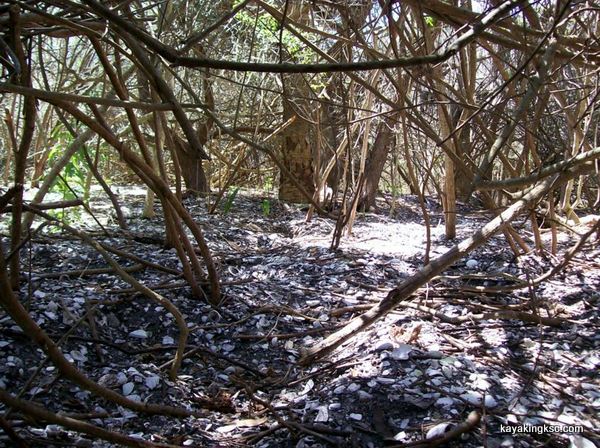 I scooted around under the branches trying to categorize the different shells and pot sherd types. (everything is still in place, I took only photos) 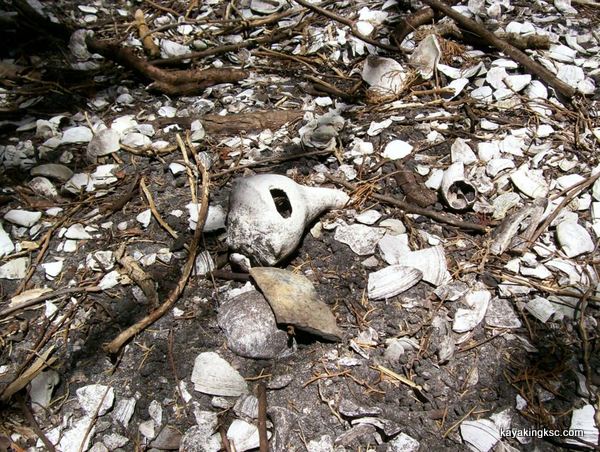 In one particular area with more tools and broken pottery I discovered the hand.... 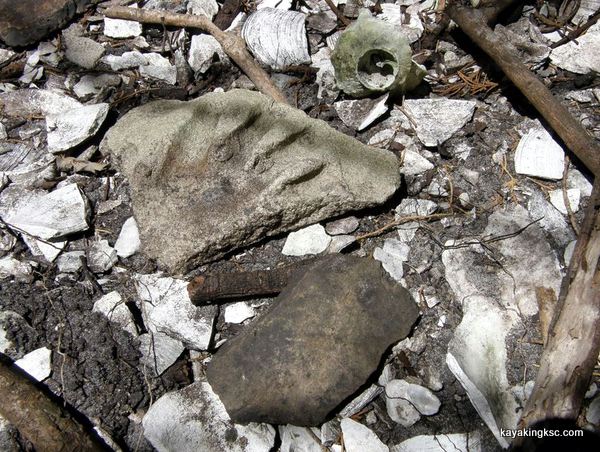 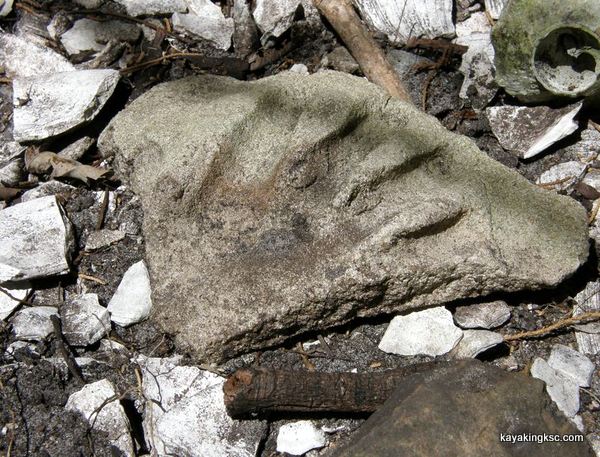 I picked up the cast and set it back down realizing it had belonged with the house ruins.

Ok I have to admit, I wrote a lot of words for probably a very anti-climatic child's hand print.

All I could think of was how fantastic it would be to return the hand cast to the family that once owned the ruins on the shell mound until the government forced them from Mosquito Lagoon.

More likely return the print to the descendants of the hand print owner. How old was the had print? Had it even predated the ruins on the midden?

Alas, I had know idea how to go about such a task and besides I was on government property and the hand print was to stay on the mound with other ghostly relics.

The little piece of cement of no value except to perhaps one family is still there unless buried by hogs.

Another story of exploring the abandoned ruins along Mosquito Lagoon.