Rescue the Indian River Lagoon System (please)
The Indian and Banana Rivers and the Mosquito Lagoon are under assault by algae blooms.


You have the power to help the lagoon system. 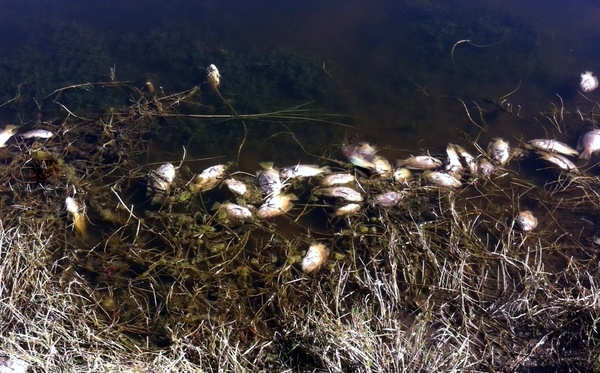 Take the pledge to Help

One day we were fishing the clear waters of the No Motor Zone in the North Banana River.....The very next day tannic colored water of a phytoplankton algae bloom migrated into the same area.

An ecological disaster before our very eyes.

"Before the phytoplankton bloom" 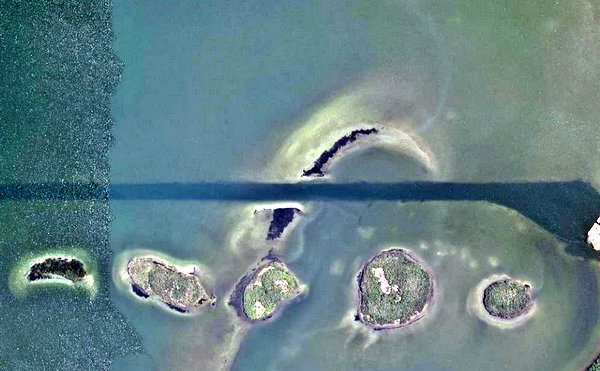 2009 aerial photo of the NMZ islands.

(Manatees visible in the photo) 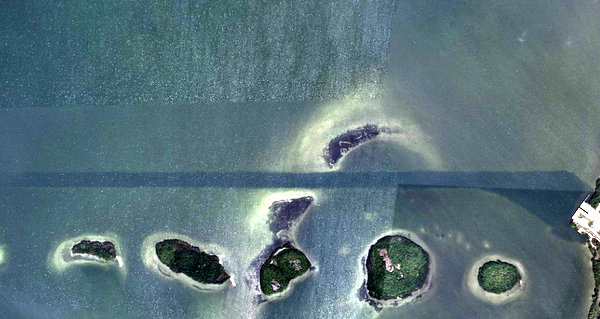 2015 Aerial photo of the North Banana River "No Motor Zone"

Both photos show the clear water & the deep channel where the Space Shuttle Solid Rocket Boosters were brought back from the Atlantic after launches.

2018 photo: Same aerial photo that shows the second phytoplankton bloom spreading around the islands of the NMZ.

The Algae blooms have decimated the Banana River sea grasses- the bedrock of the Lagoon ecosystem and food for both manatees and turtles.

Nearly a 100 miles of sea grass was destroyed in the Indian, Banana and Mosquito Lagoon. And the oxygen deprived fish died in the millions. The largest fish kill recorded since the great Florida freezes of the 1890s

So what is going on?

Our world, our lagoon summed in one picture.

I took this photograph on Kennedy Space Center. Spring droughts are part of the normal ecosystem and these fresh water gator holes are often small life rafts of water for fish waiting for the Florida summer rains.

However, notice the green water? (of course you do) The green is an algae bloom caused by the alligator pooping in it's biosphere fishbowl.

Basically he/her is over fertilizing her fishbowl and hence the pretty green.

A similar green or brown that in the Indian River Lagoon blocks sunlight and killing sea grass and removing oxygen.

An excellent expose on the Algae blooms and some of the struggle to save the IRL.

My page on Manatee deaths

So what can you do? Not your elected officials. YOU 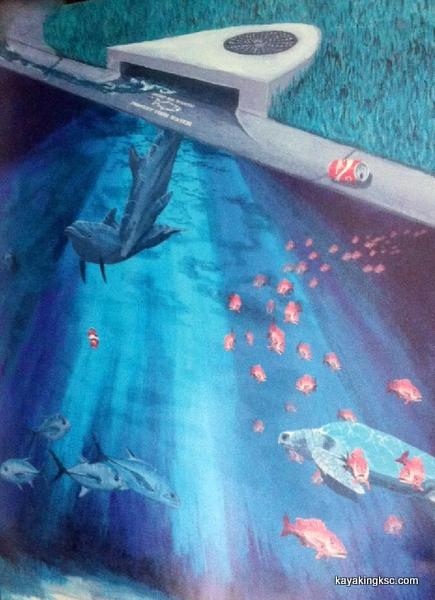 Note: This poster was on the wall of a KSC NASA building that was demolished. Artist and organization is unknown, so I cannot properly give credit to the artist. However the importance of the artwork is paramount as a representation to saving the river!

Well the tax proposal to clean up the lagoon passed and plans are proceeding for de mucking, for additional storm water improvements and septic tank conversions to public sewers/water treatment. For education

There are rules in place not to place yard fertilizer during the Florida wet season.

But what can you do?

Not wait on others and hope the rivers clear. Not wait on the politicians to divert the funds to a project that gets them votes.

What can  you do to rescue the Lagoon now?

It is pretty simple. 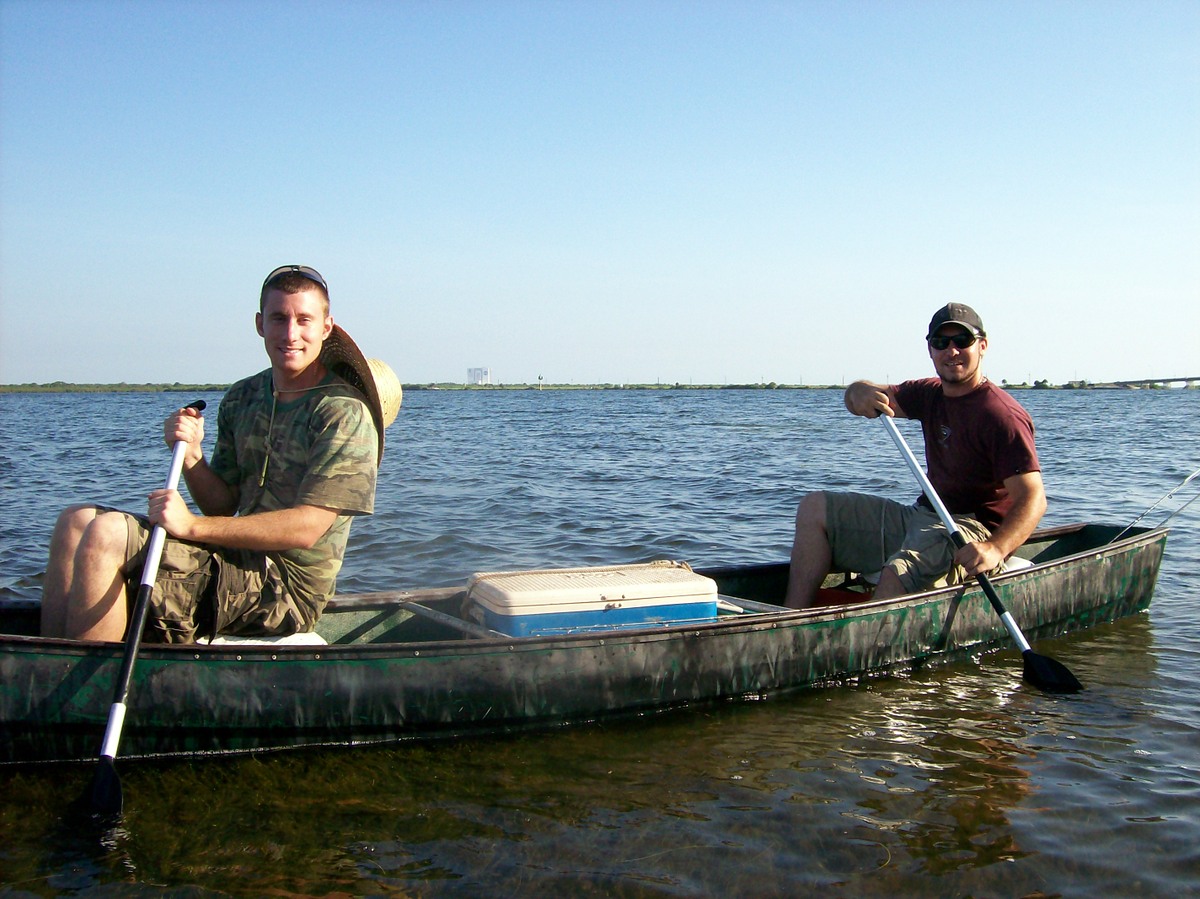 "What can I do? Right now to save my lagoon?"

Right now, you can take the pledge to stop applying fertilizer to your yard. That same emerald green of your yard is killing the lagoon. -That same pretty green as in the alligator wallow photo.

We all live downstream....

All the lagoon restoration projects are a fantastic effort. However too many people live along the shores, street and canals that all flow into some river ecosystem.

Talk to your homeowners association about fertilizer use. Talk to your neighbors, Do a science project with your children. 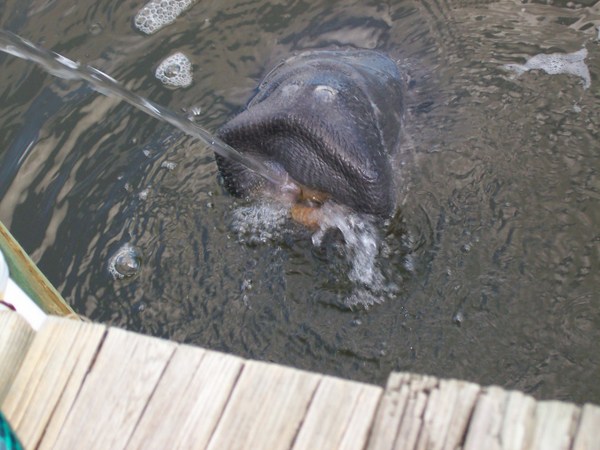 The choice is simple, stark and sad.

THERE IS NO "IN BETWEEN" ANYMORE

And it is sad, because most will chose their 30' X 30' patch of emerald green grass- their little green empire over the life of the nations most diverse estuary. 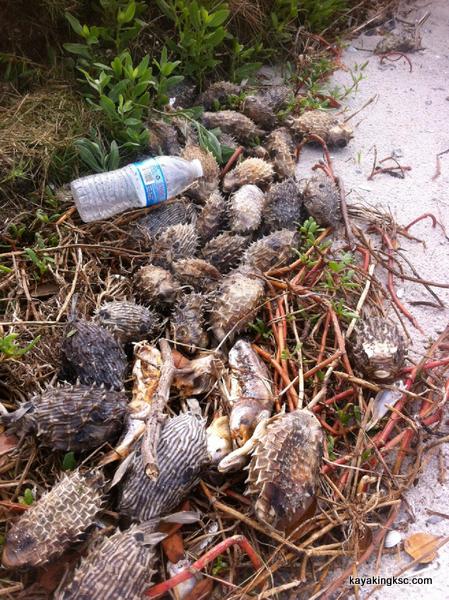 Victims of the Algae Bloom

And that is where the real David and Goliath battle will shape up.

A battle for greater restrictions on the use of fertilizer.

Because after the billions are spent on good projects, the algae blooms of death will continue until there is a near ban on these environmental poisons. An uphill battle against home owner associations, against land owners who fall for the propaganda of a green yard, against the big box stores that sell the poisons, and the politicians who are funded by the corporate interests.

Impossible fight? Odds are 2% out of a hundred for success. Note I did not say 98% chance of failure.

There is simply no choice anymore. It is all out war or a big dead lagoon.

Final thoughts. Something to consider....

The fish kills in the 1980s and 90's on the St, Johns River were horrendous. The fish kills were the result of algae blooms from the combination of rain and cattle manure.

The fish kills did not cease until the State of Florida and counties along the river purchased the cattle lands and removed the source of the nitrogen for algae blooms by removing the cattle herds.

Another example of hard won success: my families fight against the EPA, DNR and a giant oil company when a pipe line leaked into a stream in eastern Missouri- A ten year brutal contest to clean the O'Day Creek.

So improvement even victory is possible- if formidable.

Let's get to it. The algae blooms are not going any where soon. However it would be a good thing if our grandchildren could once again look out over clear waters of the IRL. 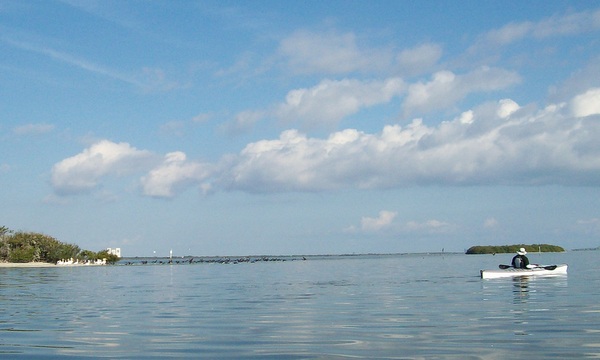 Acknowledge we all are caretakers of our environment.


Marine Resources Council  (Save the Indian River Lagoon) These folks are organized!

Excellent article at Surfrider.org, about the causes of the recent algae blooms. Urging everyone to contact their local politician. However the urge should be to contact your representative to ban fertilizer yard poisons.

Fishing report of the KSC No Motor Zone?

Surprisingly even before the water had cleared, the fishing was the same as Pre Algae bloom numbers. Fish had adapted to their new green water environment- as long as the oxygen was stable.

The sad part: Even though our numbers catch was the same, and the trout were easily in the 24" range-Everything we caught was skinny, almost dangerously skinny however the numbers were there. Fish were easy to catch. If the water stays clear, there should be some sea grass recovery this spring and summer.

The real test will be how the summer rains affect the bloom. 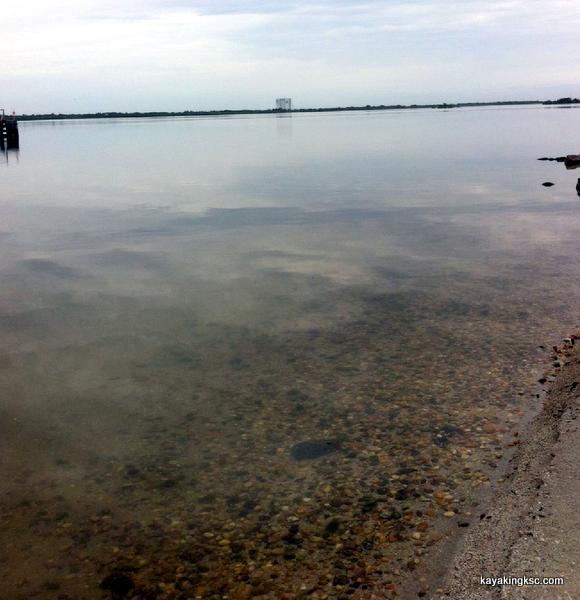 Banana River water around the space center. Still a hint of the algae bloom, but a marked improvement in water clarity.

After three years of fish killing algae blooms and loss of 95% of the estuary nursery sea grass, the lagoon cleared up in March of 2020. 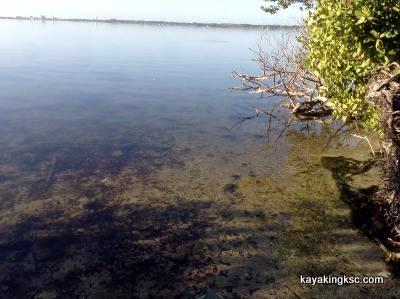 (This is where I found the troll) 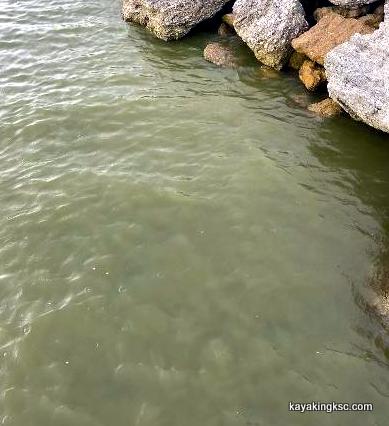 Spring & summer 2021 update, the less uban areas of the lagoon has cleared. No sea grass. Summer rains will bring??

Until fertilizers are banned for sale within twenty miles of the lagoon. -What was North Americas longest estuary will remain the new normal. Just a green soup sewer.