The abusive City of O'Fallon in eastern Missouri, a corrupt and corrosive empire intent on expansion, power, and deforestation.

Dare to object to their abuse?

With contemptuous ridicule and mockery, the city replies, "Get a Lawyer." 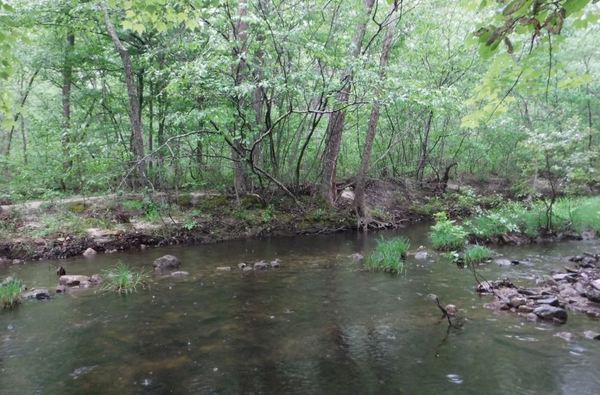 This is Bruce at Stonebridge Boarding Stables.

A request was made to me; please attempt a comprehensive list of the abuses we have suffered at the greedy hands of corrupt (of course despicable) local politicians who control the City of O'Fallon.

The City of O'Fallon uses sheer power or legalities, in partnerships with developers, (I assume family) investors, and tax-funded bonds to expand their Putin like empire.

Pre-antebellum southern states used the power of the law to enforce human bondage.

O'Fallon uses the manipulative MoDNR to assault both residents and those who reside on the border of the encroaching ever-expanding city.

Full admission, I am rather impressed with successful criminals-office holders of O'Fallon, those elected offices, living the American dream to spend other people's money and increase their own larder.

As I type this, I am weeping, yes, weeping for my choice in life, -honesty, hard work, and honor.

Crime does pay for those smart criminals in office!

Okay, but the list is also a trophy, so to speak, for the tick-like criminals to wink, have a drink, celebrate with their crony buddies, and sing "We did that!"

For context of the abuses, a Brief background of the concerned parties:

Stonebridge Stables has been in the current location off of Highway DD, since 1964. Our focus has always been on the care and nurturing of rescue horses.

Meandering between the rolling hills of Stonebridge is the creek known as the O'Day Branch. The O'Day is the main feeder stream to Dardenne Creek, a stream that flows through much of St. Charles County.

Failure of the EPA Inspector General

O'Day Park only exists because of the leaking pipeline.

The pipeline once routed through the properties now known as "O'Day Park" and the "Streets of Caledonia" housing development, finally burst open in the 1990s causing massive fish kills in the O'Day and a refusal by the Missouri Department of Regulations to remediate the contaminated creek. A ten year battle in which the O'Day was cleaned on our property, but not the area known as Busch Wildlife Conservation Area.

To this day, downstream of our cleaned property, the petroleum contamination bubbles to the surface near the Highway DD bridge spanning the O'Day creek.

A city owned park of taxpayer abuse. The park is situated on property donated by the original investment corporation when they realized, when they discovered the pipeline had been leaking for forty years due to inadequate cathodic protection.

There a few park problems..... Flooding, erosion and turbidity

The taxpayer abuse by the City. (This corruption will tie in later with: where are the trees that by Missouri law were supposed to be saved?)

And what happened to the retention ponds promised in both park and housing development?

Nice homes, I would not mind owning two or three, but did they have to strip so many trees?

Our previous Lawyer who quit

More details on the failed lawsuit

We contracted with a previous lawyer, who, for unknown reasons abandoned our lawsuit when the City of O'Fallon raised its fangs.

Our lawyer tried his best to get us to sign a contract with the City and the city would in their infinite mercy, drop two loads of broken concrete in our driveway in exchange for us (Stonebridge) releasing them free of all flood damages, forever.

(The same concrete that is free to all residents of O'Fallon)

We objected. He fled. And we are befuddled that he would insist on that contract.

The EPA of course said "Whoa! Not us, get a lawyer!"

The federal and state organizations who refused any assistance and mumbled "Get a Lawyer."

My letter to the Corps Inspector General and the Freedom of Information Request that we could never open!

My letter to DOT that got some results. -Thank you. However tax dollars were given to the contractor to build roads through mowed down forests. --Why is that permitted? At what time in the past, did the voters say, "Why of course, fund private investments with tax payer dollars."

My impression is they are only bureaucrats wanting to retire. I will link my letters to them, however their constant mantra was "Not our Job" &"Get a Lawyer."

Have to laugh, I used the wrong department last name in one of my emails, and the engineer shot back, "Ah-Ha! You're an idiot!" (My words, same thought, he was actually polite while pointing out my failings)

I will not disagree I'm an idiot, however me using one wrong name, did not invalidate the flood and silt damage that MoDNR was allowing.

I will link those emails to the MoDNR.

Do things ever change? The MoDNR and Region 7 EPA protected the oil company during the pipeline leak.

Personally: Not sure who should have had the responsibility for the Native American artifacts.

My other pages confer the failings of this group. The Heroes of O'Day creek (private joke)

The City of O'Fallon

Like a deft potter, laws, state and federal or city, are manipulated to facilitate their aggression and abuses.

Storm water failure by the City of O'Fallon

Presentation to the O'Fallon Planning and Zoning meeting about the deforestation of the 200 acres. 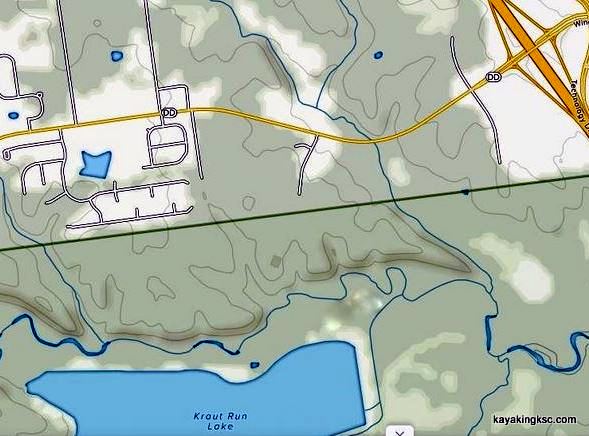 The core of the problems: Topography

Both the west slope (O'Day Park) and the east slope (Streets of Caledonia) shed water into the O'Day Creek.

Where the two blue lines meet is Stonebridge Stables.

For location reference: Busch Wildlife Conservation Area at the bottom of the photo & Highway DD is the yellow line to the interstate.

The City of O'Fallon gave the green light to deforest and pave over 300 acres. Where once water had a natural flow and time to sink into the aquifer, the water now rushes to....Stonebridge Stables.

Our complaints about the damage?

"Get a Lawyer" they snarled.

A watershed problem? Zoom in for a closer look. 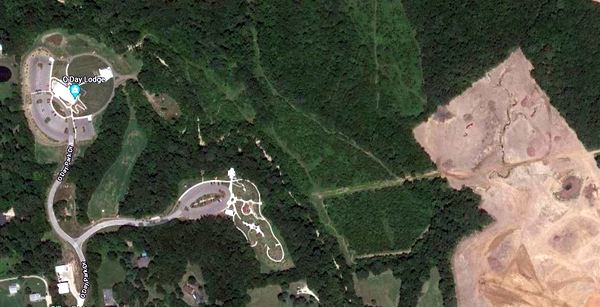 The Park on the left: Paved and cleared old growth that once slowed water. Streets of Caledonia on the right, cleared of most vegetation. You can see the "Spring Branch" creek that once drained 200 acres of woodland.

This photo cannot do justice to show the sloping hill side.

"Get a Lawyer" was snarled from both sides of the O'Day Creek.

Stonebrige Stables is in the bottom center of the photograph. 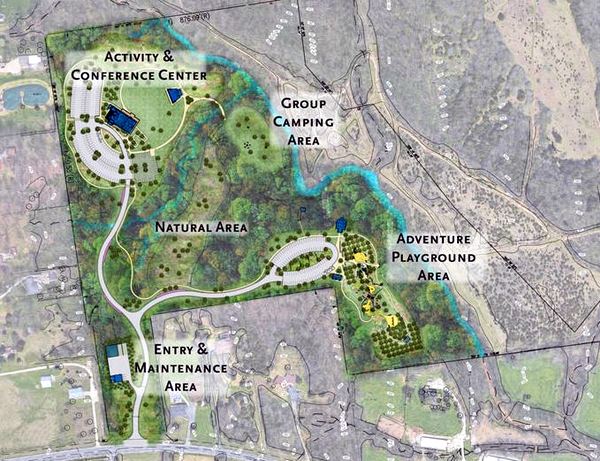 This satellite photograph shows the proposed O'Day Park. Noteworthy, the bottom park road to the playground is the old Pipeline road and you can observe the pipeline road disappear off of the right side of the Photograph.

Also just above the pipeline is the pioneer cemetery that was bulldozed to build homes.

We were insulted, abused, invaded, our concerns or objections were met with contemptuous ridicule and mockery.

We can and have shrugged off their insults.

The damages however are real and very visible. Our lawyer (who fled in terror) was adamant about bringing a jury to see the damages.

Flooding of our west pasture from the O'Day Park playground. Nearly an acre of prime pasture turned into an usable bog.

The topography of the playground was radically changed, and in addition to asphalting the top of the new man-made hill, the installation of playground astro turf-like material, which shoots the water directly onto our west pasture.

The park water chlorinated for children to play in has killed the old growth white oaks wherever the water drains.

(The City should have a retention pond.) 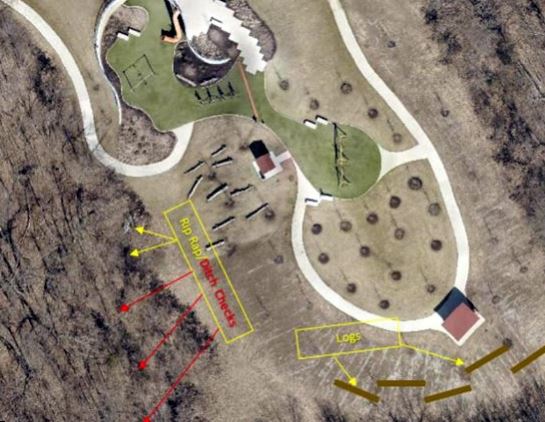 This is a City provided drone photo of the playground, on how they would help slow their poison water raging from their man-made playground hill.

Acknowledging somewhat grudgingly that they changed the water flow.

And of course, at the bottom of the photo is Terminus, the structure that exemplifies the word 'corruption.' 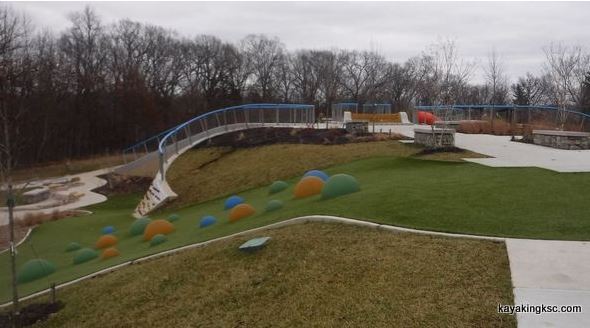 A ground level photo of the playground to demonstrate the size of the man-made hill that changed the water flow off of city property, to flood our pasture.

AND the photo shows astro-turf material, that like pavement does not allow water to absorb or slow.

***Flooding of our east pasture as a drainage for the Streets of Caledonia.

A new pipe drains directly into our west pasture.

"O'Fallon said we could drain on you," said the construction contractor.

The O'Fallon Storm Water representatives agreed in person, at a meeting standing above the offending pipeline. "Get a Lawyer," said the City Representative.

***Flooding of our east pastures as a drainage for the Streets of Caledonia via the Spring Branch Creek. Forcing us to replace the bridge between pastures. Creation a Damn above our property that if breached would flood our property

Both east and west drainage's allow silt laden chocolate-looking water to muddy our property and increased turbidity in the O'Day creek.

***Massive erosion of the O'Day Branch Creek, routed through our central property. Trees washed away and the creek is subject to flash flooding. 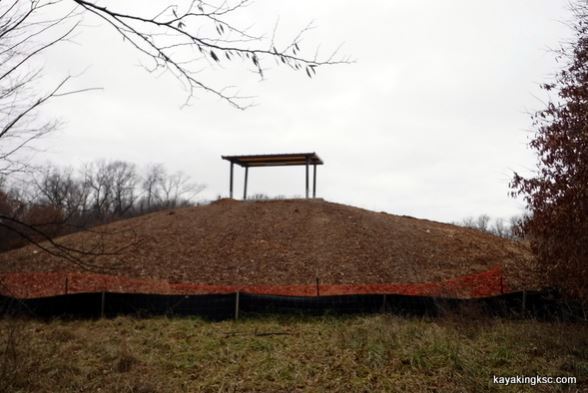 The $11,000 corrupt shelter called Terminus. In all its glory on top of the Man-Made  hill, for looking into our windows.

There has been a lot of speculation that the location lording over us was chosen as pure intimidation by the criminal politicians.

****Terminus!  The expensive 'tax payer abused' shelter constructed on an artificial hill to look into our home windows. The taxpayer abuse by the City.

****Disruption of our equestrian business during the construction of the artificial hill of Terminus. Riders were thrown from their horses as the bulldozers crested the hill and terrorizing the horses.

I am still adding photos and connecting links. Then will create pages of the email correspondence!

On my Bat page we noted there was little to no enforcement of leaving a percentage of trees standing. The result is more watershed damage in the O'Day creek.

I will use the bat page until I can get the documents uploaded.