"Soon" to be the beautiful home to 600 houses

(once the annoying forest is cut out of the way)

There is of course more forest and farms to the west.

However this section of land near the intersection of Highway 64 & Highway DD has been for years locked up in an investor family dispute/war.

Now that the blood has congealed this last bit of green is slated for another housing development.

Have to admit I'm out of step with the times. I just finished reading a St. Louis newspaper article where the mayor of O'Fallon and others were bragging (I'm paraphrasing) "That they would develop ever inch until they ran out of land.....in 2040".

So I say I am out of touch because they uttered those words with apparent pride--While I read the sentence with horror.

The article did provide a fascinating sliding tool that demonstrates the 30 year development of farm and field west O'Fallon and along the Highway 64 corridor.

Streets of Caledonia and the new Highway DD 'roundabout'

Well of course the development is going to happen. The land owner is in his rights to clear cut the forest and build endless rows of houses.

The rulers, kings and queens of the City of O'Fallon relish the idea of more houses. Be dammed any consideration of the rural lifestyle west of Highway 64, the traffic or the schools. 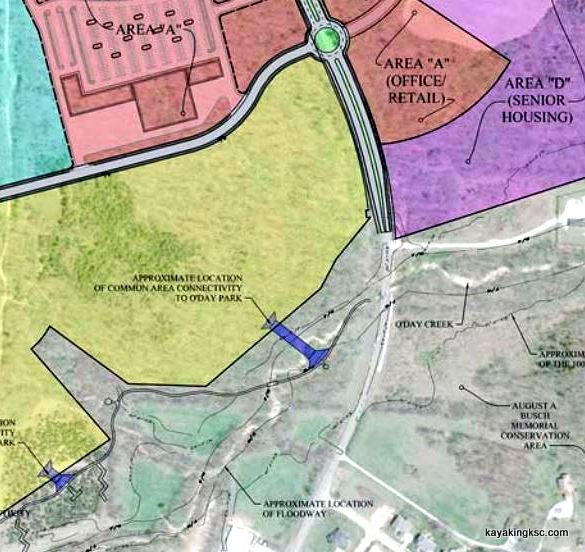 A traffic circle will be placed near the O'Day Creek. A traffic circle that the 12,000 daily users of Highway DD have no knowledge of its arrival and had no say in the road they use everyday.

A traffic circle that will bring the 55 mile an hour traffic to a near dead stop while they navigate a 15 mile an hour roundabout. 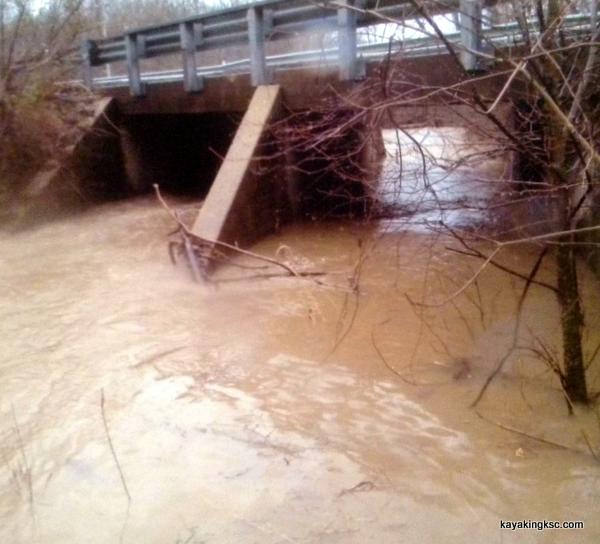 The new traffic circle will not only dramatically lower traffic speeds, it will back rush hour traffic onto the old 1944 O'Day creek bridge that was condemned in 2018

The City Officials will blatantly (righteously) explain that the users of Highway DD from the back country "are not their citizens" and therefore the opinions of the people who live outside the City Limits or their traffic delays are not the concern of the City.

(The way I read that statement is the hicks out in the farmlands and wineries are not lining the pockets of the City Officials. The world after all does run on corruption.) 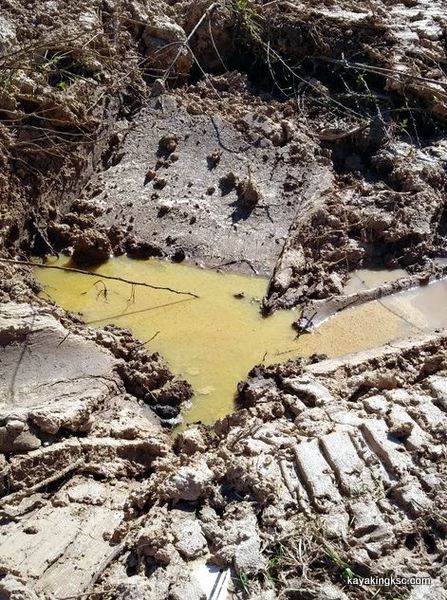 The price of developing the ridge above the ODay Creek. The tracks are from the equipment cutting down the trees.

At least they left some drinking water for the birds and animals. Of course this mud will flow what direction? 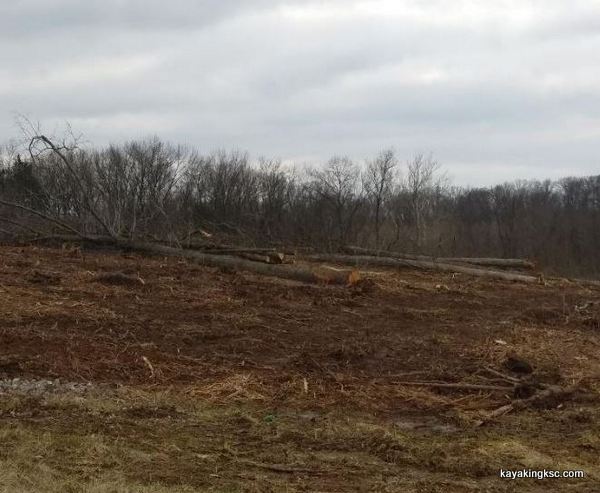 However I have to admit it is less painful to see the prime farmland get paved over than the destruction of the forests.

That farmland has been cleared for 150 years. Paving the farmland means people might starve but the animals were already gone and the watershed impaired.

The Enchanted Forest as it was known by the local hiker and backers was a series of ridges too steep to farm and was left for hardwood and walnuts.

The Enchanted Forest was a land bridge/wildlife corridor for animals traveling between the 8000 acre Augusta Busch Wildlife Area and the O'Day Park. 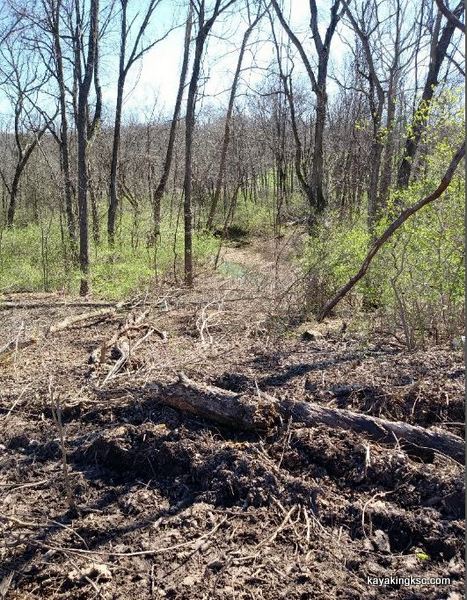 Big hard wood buzzed out the Enchanted Forest. (Getting ready for the asphalt. However I know it will be pretty asphalt.)

Note I used the term "Was"

The developer with a little help from the City Council already had the loggers come in and cut as many trees as they could before the "Bat protection laws" kicked in March. 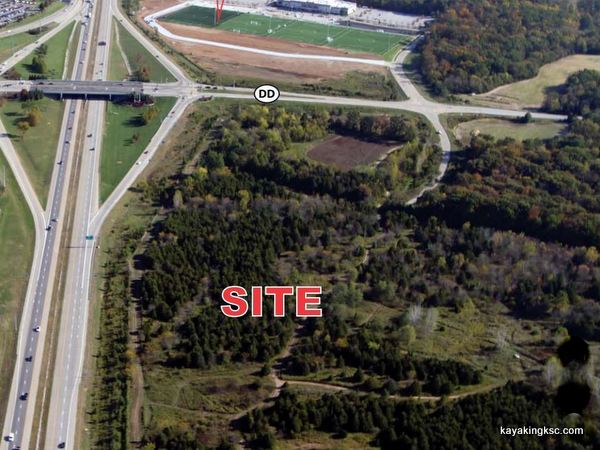 The last green space to be paved over. Location is the I-64/Hwy 40 Corridor straddling the east end of Highway DD

60 acres of the LAST green to be clear cut of the old trees and asphalted over.

The plan is to build a Mixed-Use Development. And then "convince" the City of O'Fallon to change the zoning to put up high density apartments for a total of 600 residential homes and strip malls.

What makes this location any different than the thousands of other acres saturated with houses?

The current location of the new Streets of Caledonia is a wildlife corridor between the 8000 acre wildlife area and the new Green O'Day Park.

The worst part of the story?

For a fraction of the cost to build and maintain the O'Day Park Lodge (a forever burden in operation costs) THE CITY COULD HAVE PURCHASED THE LAST 60 ACRES OF GREEN as a permanent wildlife corridor to Busch Wild life area. Forever, green space of biking and hiking trails that would have drawn nature lovers.

Why wasn't the land purchased for a park & wildlife corridor?

Lucrative contracts for land clearing, building material and new tiny trees to replace the old growth forests. That is only my speculation.

Any city father who actually cared for the lifestyle of their citizens would have worked to purchase the wildlife corridor.

After all the land for O'Day Park was free, but the citizens of O'Fallon passed a bond for a seven million raid on the taxpayers to develop the O'Day Park.

But the adjoining land now known as Streets of Caledonia?

"Streets of Gold" for the city fathers, and their chosen business partners.

The developers pay out the bribes for the politicians to create favorable rules; they think in long term projects. BIG money.

1. The eminent domain of lands to installed the buried sewage line on the west side of interstate 64 & both sides of HWY DD when there was not a need.

Someone was thinking "Streets of Gold" & used eminent domain.

3. Streets of Caledonia. 600 hundred new homes on the last Green Mile with 'connectors' to the O'Day Park that was not needed.

And during all projects? Lucrative contracts for land clearing, building material and new tiny trees to replace the old growth forests. 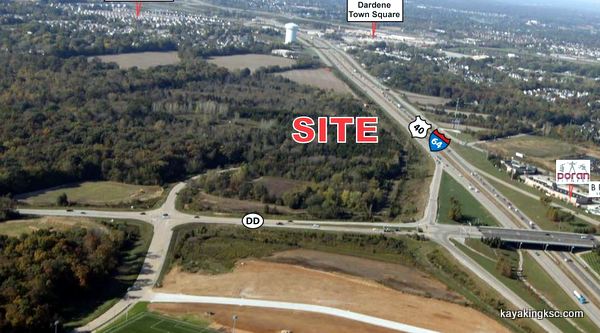 Another view that shows the houses surrounding the last Green

This is the last Green in O'Fallon's 30 year war on nature and their unholy alliance with uncontrolled developers.

The true scope of corruption lies in the fact that the City of O'Fallon just finished their so called "Green space" of pavement and lodge, concert venue and artificial sward.

Convincing the gullible tax payers of O'Fallon to fork over milliond was child's play to those officials steeped in the art of back room deals.

The more the citizens complain, the more money our "Leaders" get to request for their bribes to "Pave" the way for destruction of the landscape.

The developers know payout is the price of business & the city councils, the mayors and city fathers know they are only in office a short time

Life is good to be in bed with corruption & be dammed that that pesky foliage. Streets of Caledonia

This project could be a sterling example of the incestuous and parasitic relationship between our community "Leaders" and the developers of the endless housing developments that blight the land.


And of course very few care about the bats and homes for their pups.

Return HOME from the Streets of Caledonia