Of interest to no one but me, is the fond memories of growing up in eastern Missouri and the forested hills and Missouri River that was my playground.

It is those recollections that compel me to drive from Florida to enter in the 340 mile Missouri River canoe/kayak Race, the MR340

What is four days of mud and heat like? MR340 88 hours on the river

Sort of bad things secreted away in the hills... 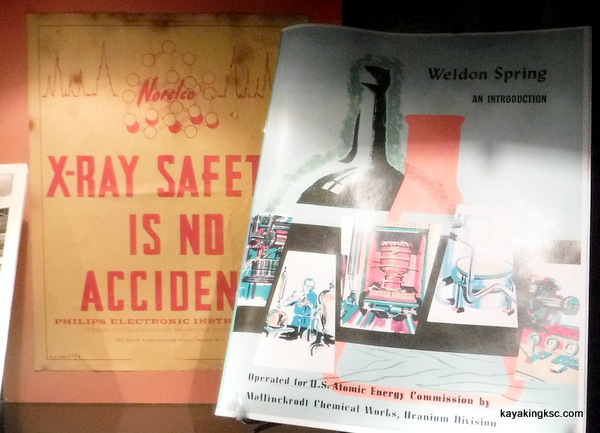 On the bluffs overlooking a muddy Missouri River a "HOT" relic of the cold war. "A radioactive legacy of the Manhattan Project on the St. Louis region" (Quote from the Secret City Website)

As a kid, graduation, the Air Force and Kennedy Space Center not even on the radar; I recall the first time I snuck into the abandoned Weldon Springs Uranium Processing Plant. (It was also years before the United States Government declared it a Superfund site)

I tell the story often. The first time was memorable.

It was not the spooky abandoned castle like buildings spray painted from multitudes of other curious teens.

Nor the radiation signs falling off the rusty fence or even the Simpson-like caricature of a yellow-cake processing factory complete with drums of unknown & curious colored waste laying about, some of the barrels dumped in a pond.

Of course all those things were pretty cool & I expected to find 6 legged frogs in the pond...

I took this photo in the Weldon Springs Ordnance Works Museum

No it was the WOLF.

Not a coyote as the Missouri Department of Conservation would have you believe -until modern game cameras forced them to admit that young male wolves travel the Missouri River bluffs and wooded bottom lands.

My encounter with a wolf.

I had just pushed my way though the hole in the rusty fence as the wolf was approaching to leave via the same route.

We saw each other at the same time. We both froze in surprise.

Why I tell the story so often is because of the surprising intelligence in the manner the wolf appraised me.

I would say neither one of us were scared.

We stood still like that for a long time. Probably only ten seconds in truth, but it felt far longer. Finally the wolf bolted into the forest.

I smiled ear to ear and headed towards the castle. (Uranium processing plant) 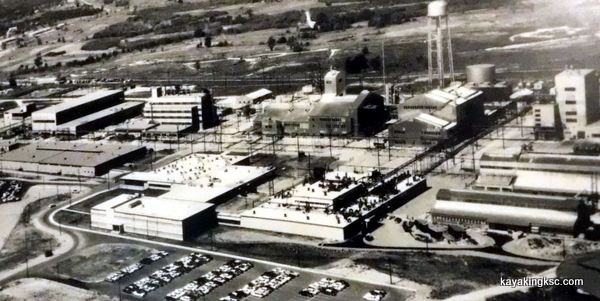 As I recall, only the tall building in the upper right was always the main attraction: "The Castle"

Many of the other buildings in this photo had been burned in a attempt to purge the radiation. (light the fire, turn off the geiger counter and everyone is happy) 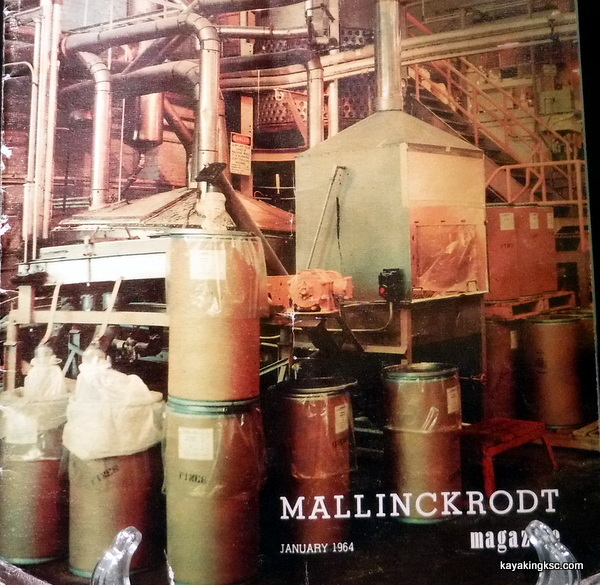 Waste from the operation was stored on site or dumped at nearby Weldon Spring Quarry.

The wolf was cool. But returning to the Weldon Springs processing plant.

A relic of the cold war. When I see the mess our government made to create weapons, I shudder at the nightmare ecological disaster that the "other side" must have made. 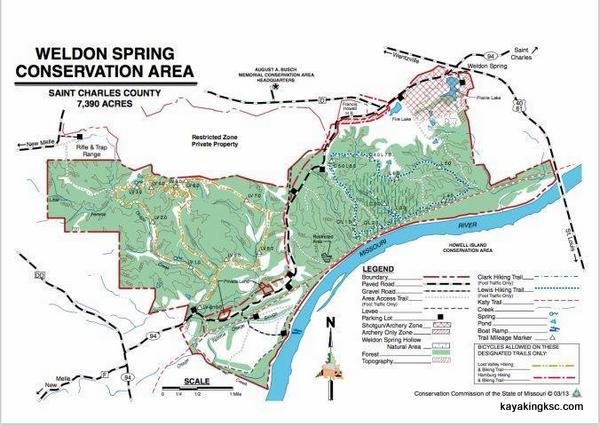 The Weldon Springs site area is too 'Hot' to live in. The little fact of bothersome radiation does not prevent hungry developers from constantly attempting to have the area re-zoned to build houses. The area is some of the prettiest land in the North America.

Details of the developers plans and the DOE commenting on the radiation levels. (navigates from this site)

The first I heard of the Superfund Status

I recall doing research for the worlds longest non stop River kayak canoe race, (the MR340) and looking at satellite photos of the Missouri River that twisted past the nearby Busch Wildlife & Weldon Springs area (my playground as a kid)

During my research I happened to come across an immense- dare I say giant white blob in the photo.

"What the heck is that?" I said aloud and enlarged the monitor screen until I could make out an automobile parked at the base of a giant monstrosity.

The man made structure sitting near Highway 94 was so large it was difficult-to-impossible to place it into any perspective. 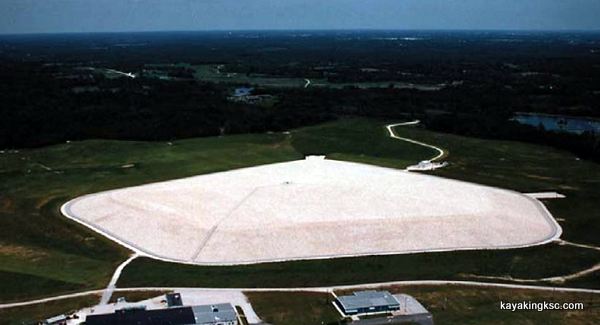 What the heck is that thing? 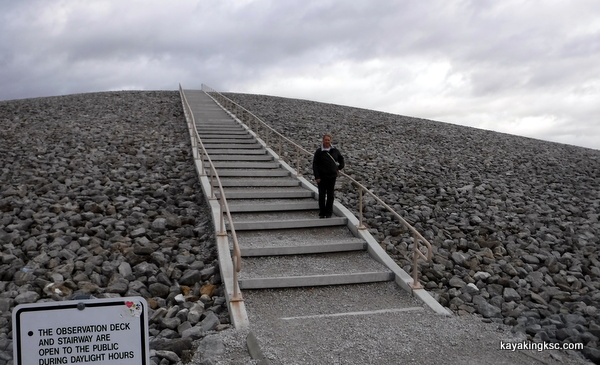 The "Cap" over the radioactive materials.

Stairs up the "Dome" -Open to the public

I had often used the Weldon Springs boat ramp on the Missouri River and had driven past this location many times.  What.....?

A quick phone call to my brother and a search of the Internet explained what I was looking at.

It was container of heroic proportions to hold the contaminated debris radioactive waste from the Weldon Springs uranium processing plant!

The containment area is open to the public, with its own museum and is a popular field trip location for local schools!

Had to delete this photo per the DOE

My apology. Will find  a replacement

The Weldon Spring Interpretive Center (Museum) as seen from the Top of the containment dome.

I realized my confusion: while I had been away in the  United States Air Force and then as a diver for the USAF the Federal Government had designated the area as a Superfund Site (at last some concern with the elevated radiation levels in the local springs)

Anyway as I had been enjoying the blue waters of the Caribbean and south Atlantic; federal contractors had been constructing the Weldon Springs stone & clay mountain: 18 acres in size and a 100 feet high!

The Containment dome as seen from the museum back door

On one of our winter surveys of the race course (The entire state of Missouri) To my amazement; from the overpass near our hotel I could see the top of the Weldon Springs white mountain jutting above the forests of Augustus Busch Wildlife Area!

And so our winter trip to the Weldon Springs site...... 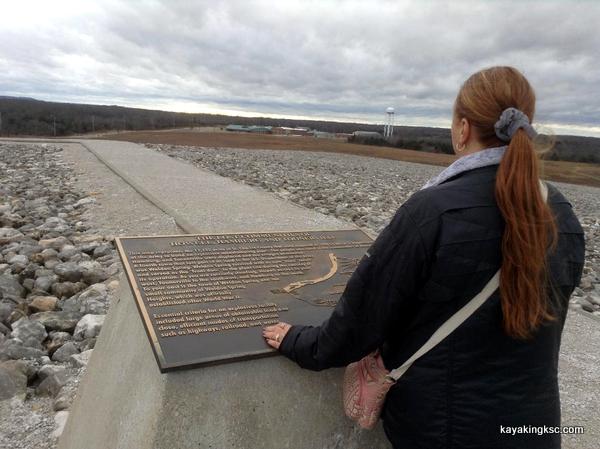 One of the plaques at the top of the containment dome.

When we walked to the top of the concrete dome we could trace the edge of  the adjoining wildlife area by the progress of development -only stopped by forests of hardwood protected trees.

Plight of the Indiana Bat

YouTube video on the history of the Weldon Spring site

(Navigates from this page) 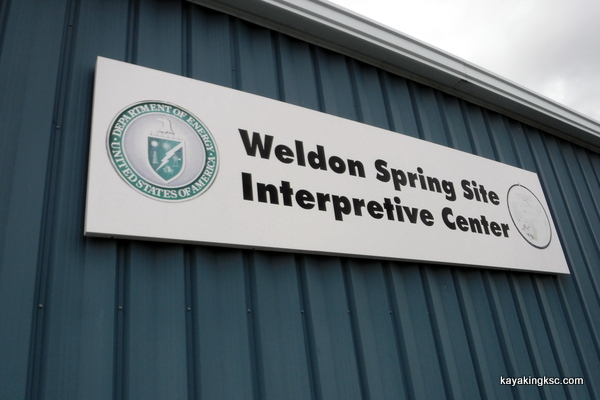 We Visited the Weldon Spring Site Interpretive Center on Highway 94. 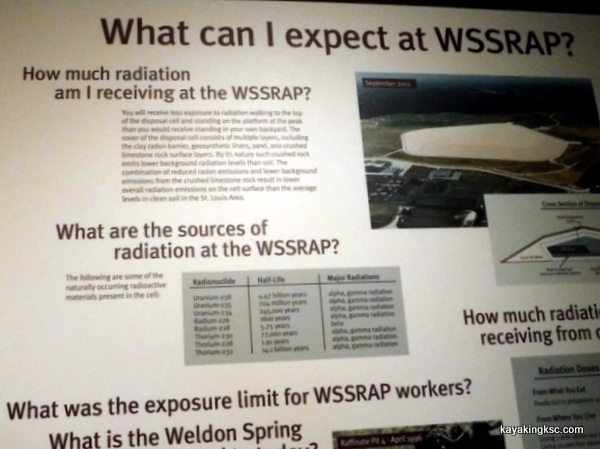 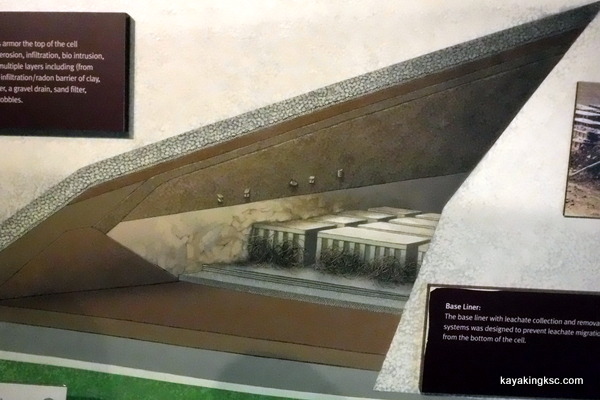 What the inside of the containment dome looks like....

Photo taken in the interpretive center 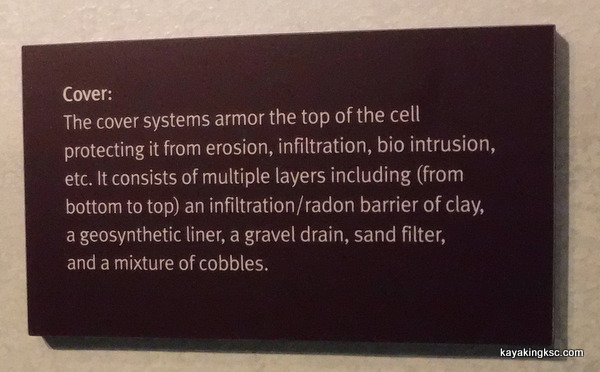 You Tube video of exploring the ruins of the Weldon Spring "Yellow Cake" processing factory before it was tore down and buried in the containment cell.

Found this interesting article on the clean up of the Weldon springs site:

At Weldon Spring, in rural St. Charles County, Mo.,  a quarry and nearby uranium plant were contaminated with chemical and nuclear materials.  As a result, radioactive water is now seeping through limestone into the groundwater. If the quarry water is not removed, there is a chance the seepage will soon reach nearby well fields that supply most St. Charles County s with water.

The contaminants include TNT and DNT, World War II-vintage esxplosives dumped at the site by the Atlas Powder Co. After the war, tons of mixed radioavtive wastes were thrown in the quarry by Mallinckrodt Chemical Works. The waste continued to be hauled to the quarry until 1968.

So in 1986, the DOE began an ambitious 12-year cleanup at the two sites. The estimated cost to the EPA Superfund has doubled since 1989, and now stands at between $650 and $850 million. About $4 million of that money has gone to build the water treatment plant at the quarry.

The discharge is the first of 20 million gallons to be released into the river over the next five years. After drainage, solid radioactive wastes will still have to be removed. The second batch of quarry water is supposed to be treated in late January [1994].

I grew up in the area, exploring, hunting and fishing everywhere I could sneak into and had never heard of the creek that allowed contaminated water from the Weldon Springs Raffinate to drain into the Missouri River.....wow.

When I read about the 'Creek' on the Secret City web page--well, road trip when back in Missouri.

I searched Google maps while in Florida. Picked what could only be the few choices in that hilly country around the factory.

However it was not until I talked with the museum/interpretive center guide that the correct stream was confirmed.  To my surprise, the very stream was on my list of places to hike! 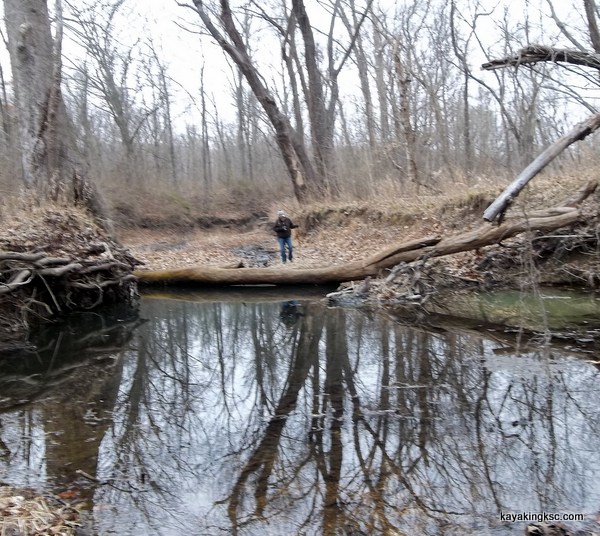 Just an hour hike down a "steep" hill to the Raffinate pit drainage creek!

Of course radioactive water is no longer discharged into this creek on its way to the muddy Missouri River-however that did not stop me from searching for the six legged tadpoles.

As to be expected, that 'steep' hill took a lot longer going up than down. But then we might have had yellow cake mud on our boots...Perhaps, or perhaps just good old Missouri mud.

The "Society of survivors of the Weldon Springs Diaspora" 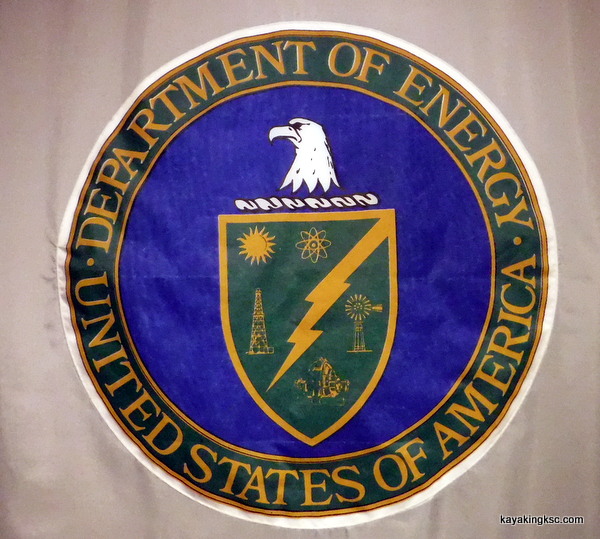 Anyway, sleep safe at night knowing you are protected! 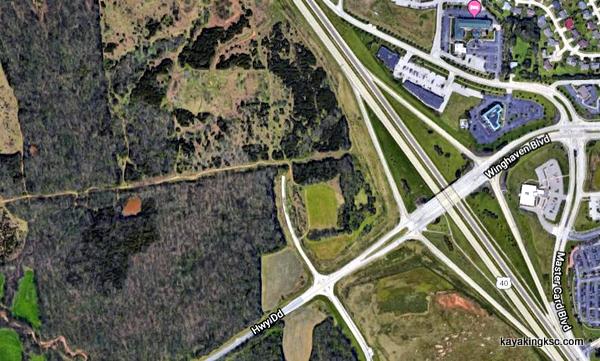 The scar in the center left is the old "Cherokee" pipeline.

Follow the line across the interstate (at the location of the blue building) "was" the huge fuel storage tank and refinery. It just disappeared one day.....

At the interpretive center: No mention of the oil refinery?

I think no mention because the refinery was a private company and not contracted by the gov.

I used to explore the abandoned oil refinery on horseback and bicycle. The berm around the giant tank contained water and fuel with the tell-tale rainbow sheen. My imagination would always get the best of me and I would spend hours looking at the bull frog tadpoles in the oily berm water-seeking that six legged tadpole.

But then it was gone. The giant tank, the concrete tanks. The property was purchased by investors for a "Lion Camp Safari" which never actually opened. That land was then purchased by Monsanto for testing animal foods (I think)

Best rumor I have had is that the debris is buried under the Winghaven parking lot.

Our horse back explorations of the area as the land was cleared for the Lion Safari Camp discovered a hole in the clay ground as big as a quarry. This giant pit was dug about the same time the refinery tank was dismantled. And the debris had to go somewhere? Cheapest solution: Bury on site.

(I often wonder if the "Lion Camp Safari" scheme was just a ploy for investors to remove the oil refinery tank and ruins in preparation for future development. Look at the area now.)

Our own 'personal' horror story of the Cherokee pipeline leaking into the O'Day branch Creek and the ten year fight to have the contaminants cleaned.

No containment dome for us

Only a hostile DOT, EPA & Office of Pipeline Safety out to protect their pet oil company.