Before I started writing Freedom's Quest;

-(I never had any plans on writing) Just love to read history.

On the internet of course, I came across the translation of "A Gentleman of Elvas" one of the four or five eye witness accounts of the Spanish Invasion of Florida and the southeastern United States.

Everything north of Mexico was then called Florida.

As a history geek, of course I could not resist reading the journal during my lunch breaks. Then studying maps and towns of then and now and trying to recognize the names of the Native Americans encountered by the invaders.

A few problems hindered me in that endeavor. First the Spanish-English translations. Second, and more important, the years following the European invasions of the new world witnessed migrations, diseases and the re-forming the nations and towns into newer cultures composed of people with a better tolerance to European diseases.

In Short, names, clans and genetic make up changed even before the arrival of colonists.

A note on most of the art I have added. The drawings or wood cut prints come directly out of the Library of Congress 'with no known restrictions on reproduction'

Note on the arrangement: I chose to tell a story using the images and consequently they are not all in chronological order.

It wasn't that De Soto brought 500 sets of chains to Florida and Chained everyone he could to carry the expeditions baggage.

No it was description of the chained Indians when they had to cross a swamp. In hip or knee deep muck they would roil the water with their chains and make the gar or mud-fish. rise to the surface and the Indians would eat them raw standing in the muck.

For days, perhaps weeks that description bothered me until at last it dawned upon me. The invaders could not feed the captives carrying the army's baggage!

How did they manage to feed everyone?

And the realization that they were not able to feed everyone. 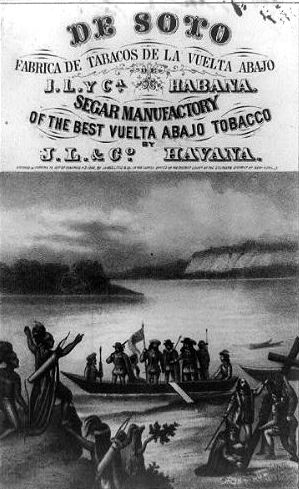 Have to love the fantasy art that the natives of North America welcome nearly a thousand soldiers with open arms as portrayed above. 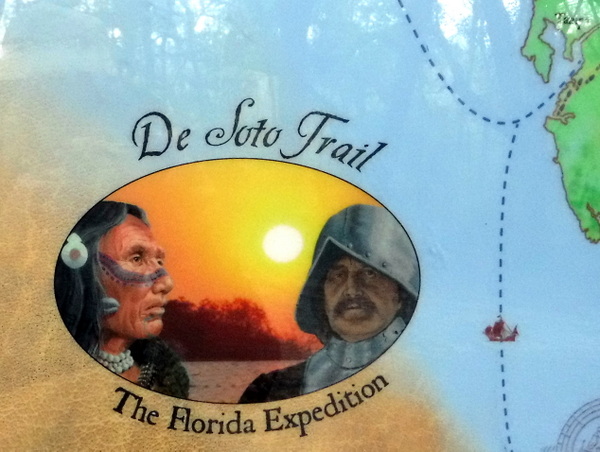 A sign at the stunningly beautiful Ichetucknee Springs, suggesting something evil may have happened.

In the school books, the De Soto expedition was put in the category of "Brave Explorers."

However upon reading the eye witness accounts of the expedition, and the brutal chaining of 500 native Americans to carry the expeditions baggage, it can only be defined as evil. 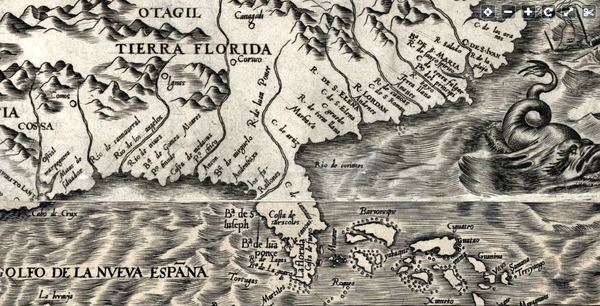 Everything north of Mexico was then called Florida. 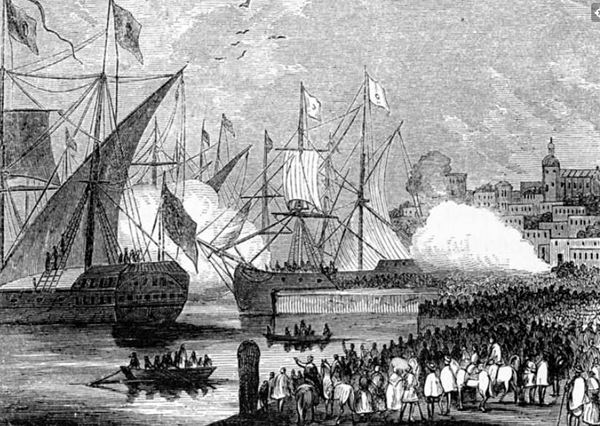 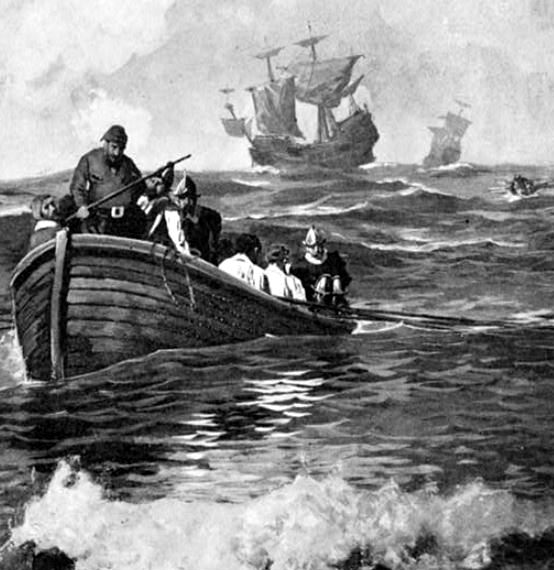 https://www.loc.gov/resource/cph.3c04323/ Title "The caravels had arrived" Summary Juan d'Añasco with soldiers in a rowboat after arriving in the bay of Apalache, caravels in background. Contributor Names Gibbs, George, 1870-1942, artist 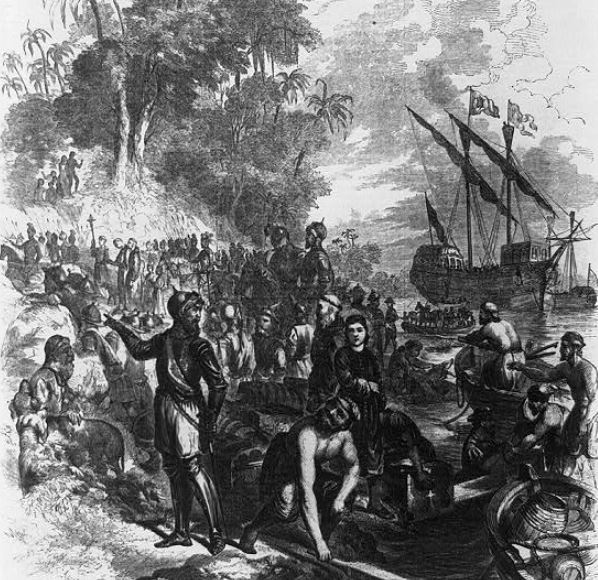 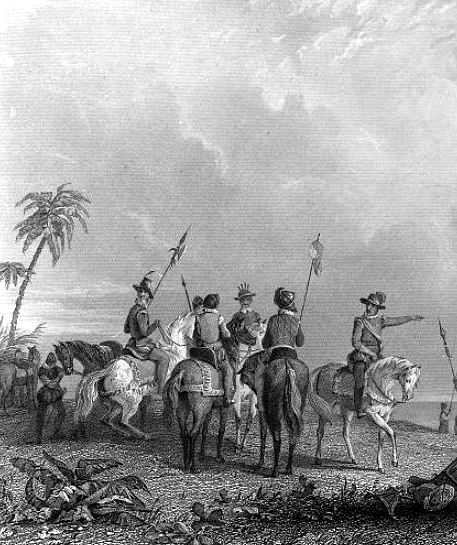 My favorite of all the drawings.

Unlike the other landing drawing, I would guess the artist who made this Tampa drawing actually visited Tampa Bay and captured the afternoon storms that often make Tampa the lightning capital of the world. 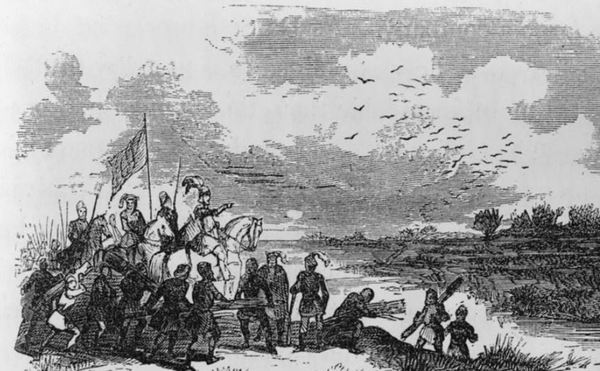 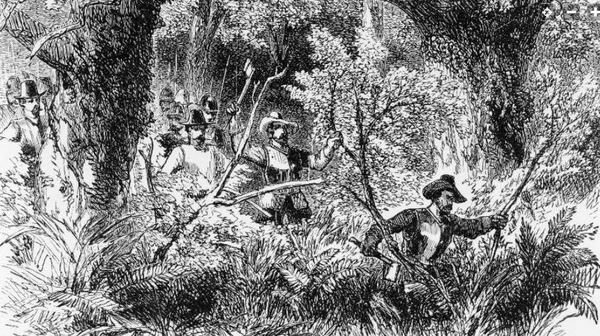 Florida after 500 years is still difficult to push through. 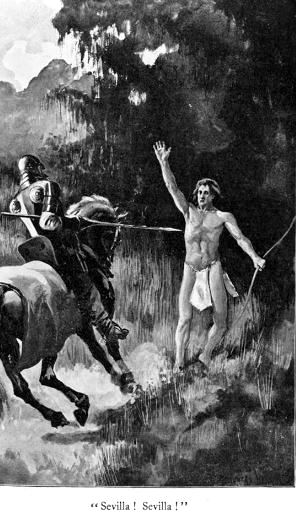 The discovery of a Spaniard who had lived with the Florida Indians. De Soto now had a translator! 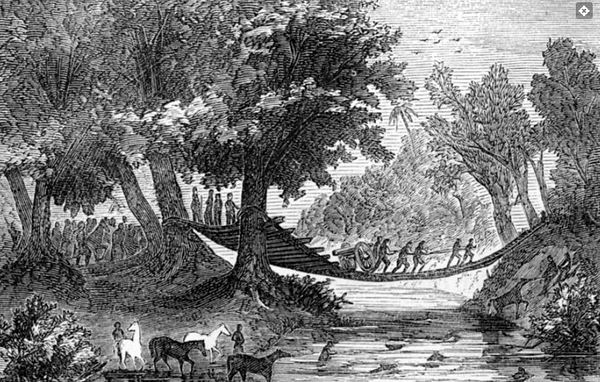 Swimming the horses across a river. No gold yet. 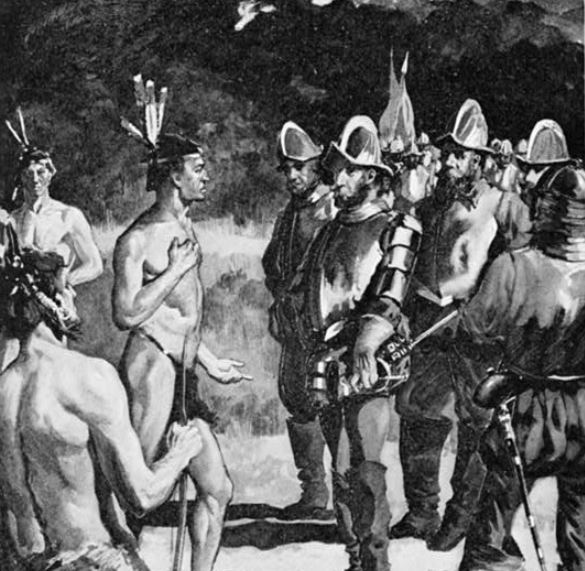 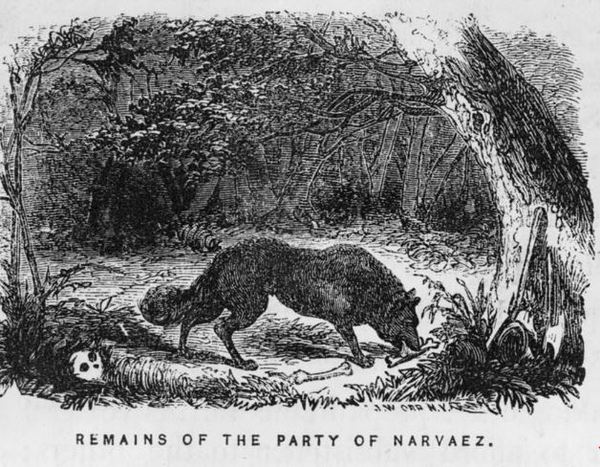 Discovery of the remains of the Narvaez expedition.

Four people of the expedition completed the trip to Mexico. 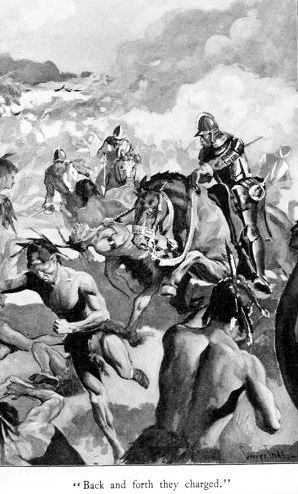 Title "Back and forth they charged" / George Gibbs. Summary Spaniards, with swords and lances, on horseback attacking Indians during the Battle of Mauvila. Contributor Names Gibbs, George, 1870-1942, artist

Native Americans war on the invaders 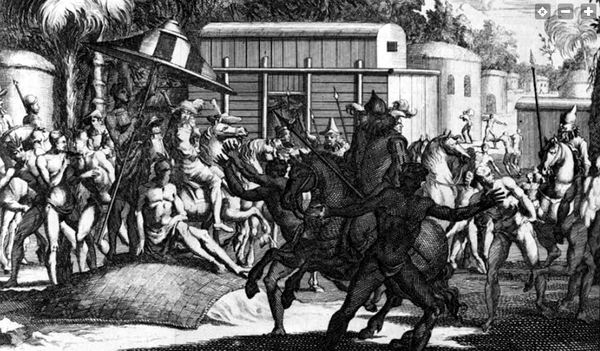 Wary of the invaders 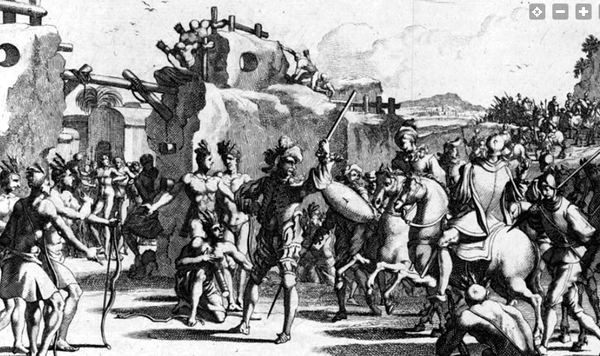 Interesting drawing. The vast army approaches from over the ridge. 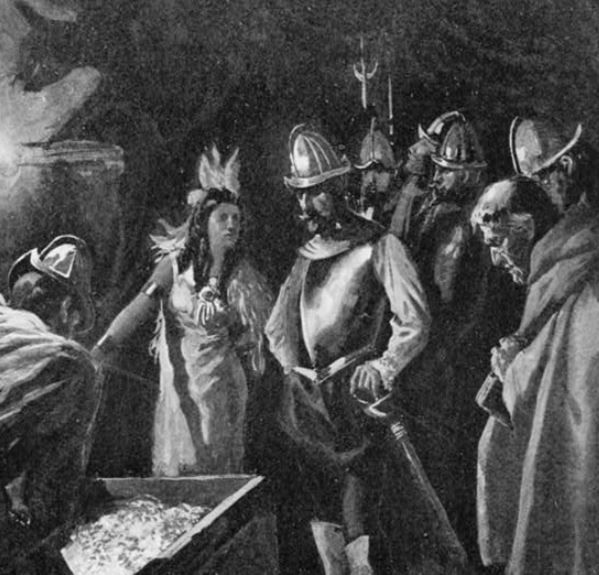 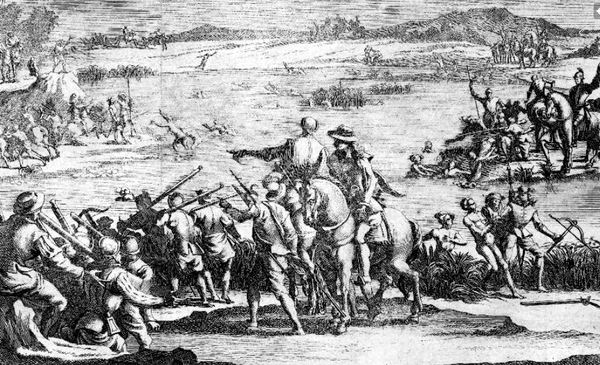 War around the pond

Title [Resolution des Indiens, & leur fortir de l'étang] Summary Resolution of the Indians and their coming out of the pond. Created / Published [published 1731] 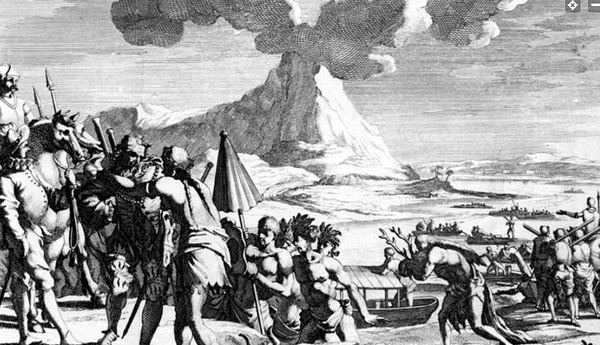 Until I read the journal, I had no idea Soto used 500 native American slaves to carry the expedition's supplies. 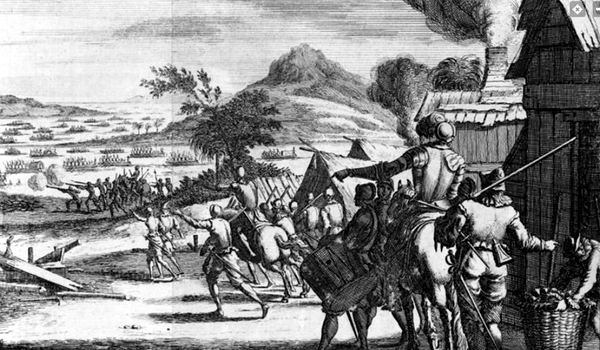 War in the vast land known as Florida.

Steel and horses against flint and chert 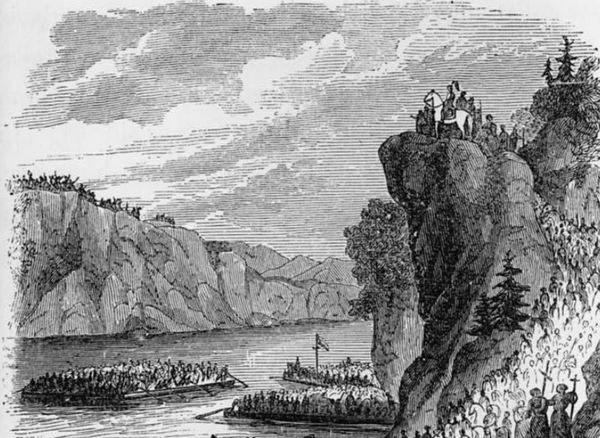 One of my favorite drawings, only because it hints at how many people, soldiers, slaves and freeborn herdsmen who were part of the trek across the Southeastern United States

How did they feed everyone? 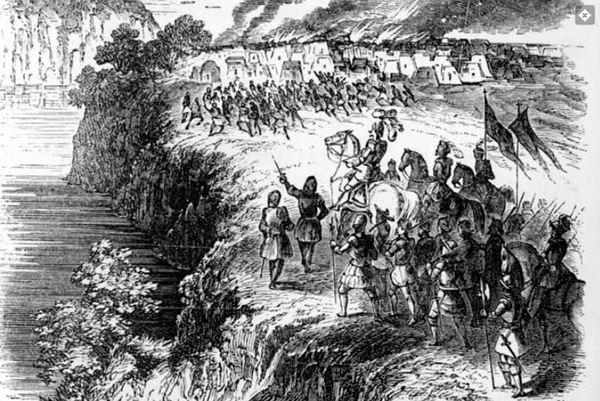 Natives burn their own village at the approach of Soto's armies 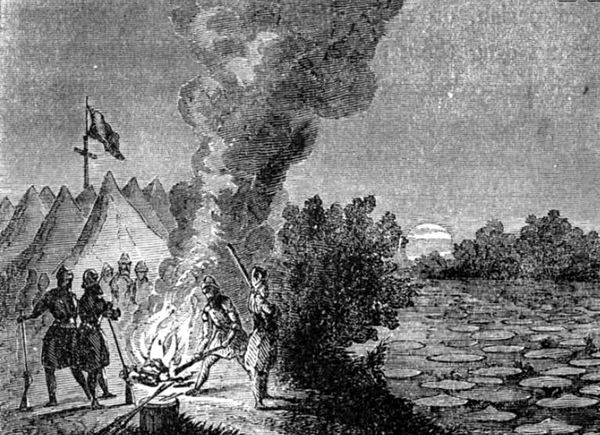 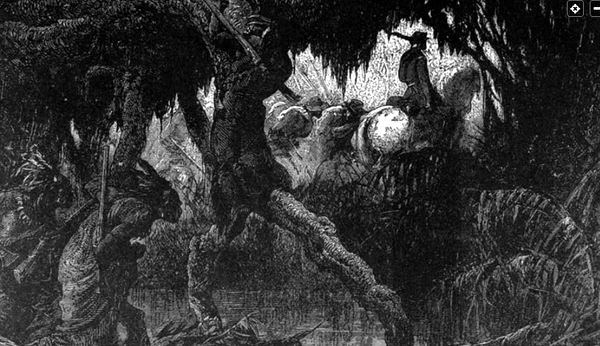 The Library of Congress has this tagged as a the De Soto Expedition, invasion. I think this might be a mistake because the stalking natives are carrying guns and the Europeans are dressed more like soldiers of the Seminole Wars. Or the artist envisioned the De Soto expedition with the incorrect weapons and clothing. 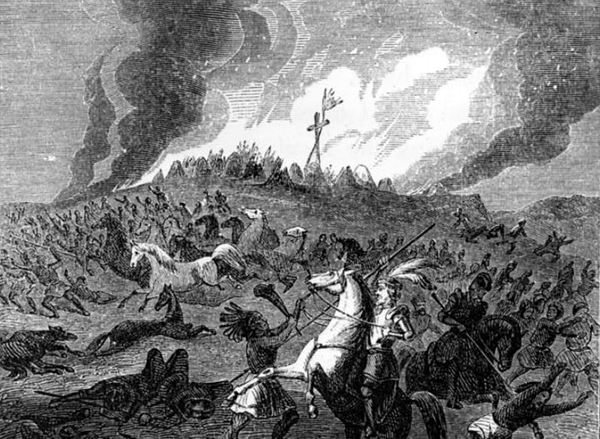 This may be a drawing of the disaster at Mabilla.

The fight at the fortress of Mabila in the country of the Alabamas:

“The Indians fought with so great of spirit that they, many times, drove our people back out of the town. The struggle lasted so long that many Christians, weary and very thirsty, went to drink at a pond nearby, tinged with the blood of the killed, and returned to the combat."

"breaking in upon the Indians and beating them down, they fled out of the place, the cavalry and infantry driving them back through the gates, where losing the hope of escape, they fought valiantly; and the Christians getting among them with cutlasses, they found themselves met on all sides by their strokes, when many, dashing headlong into the flaming houses, were smothered, and, heaped one upon another, burned to death….”

"They who perished inside the walls, there were in all two thousand five hundred, a few more or less. Upwards of five thousand bodies lay outside on the plain. Of the Christians there fell two hundred... Of the living, one hundred and fifty Christians had received seven hundred wounds..." 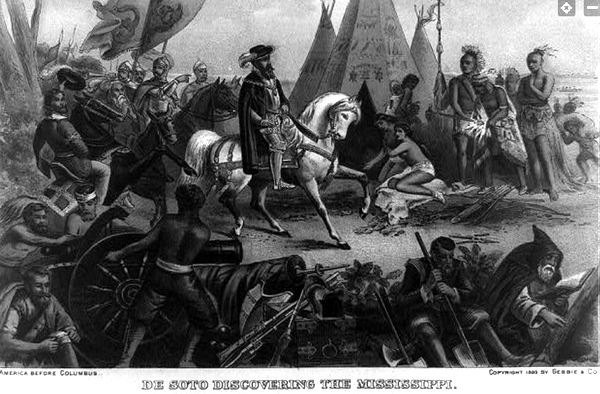 The drawing in my school books as a child.

No sign of the 500 chained men and women carrying baggage, or the 200 women captured at Maubilla, to sell in Mexico. 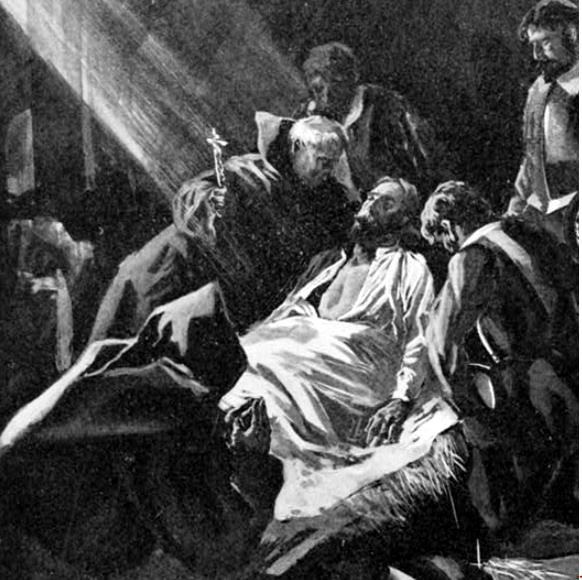 Death of the Adelantado b&w film copy neg.  Illus. in: De Soto and his men in the land of Florida / Grace Elizabeth King. New York : The Macmillan Company, 1898, facing p. 250. -  Reproduction of illustration by George Gibbs.