(Perhaps the page should be named "Sometimes I do stupid things")

As a com techs we were dispatched to all areas of Kennedy Space Center, launch gantries to crawlerway tunnels. From the Launch Control Center to the KSC visitor center

One summer day we were sent to trouble shoot equipment on the OPF roof.

Actually the 95 foot tall OPF 1&2 shared the same roof. (Shuttles Atlantis and Endeavor were processed for their next missions in OPF 1& 2)

OPF 3 was a stand alone building north of the VAB. The buildings were heavily guarded and 'the place for VIP visitors to the space center. I had seen both Prince Charles and Peter Frampton at OPF 1&2 (So I am impressed easily)

For non space junkies "OPF" is an acronym for "Orbiter Processing Facility" and the buildings were (and still are) sophisticated spacecraft maintenance hangars. The OPFs were a living sci fi story where the shuttles were inspected, tested, and refurbished (re-entry heat shield tiles replaced)  These space ship garages were also shelter from the summer storms and brutal Florida heat that would damage sensitive equipment.

Florida is a hot place. 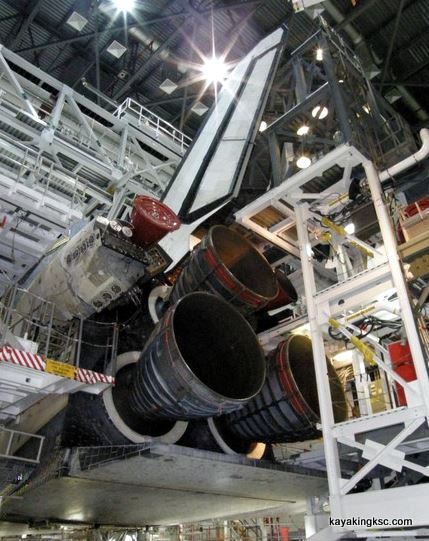 Only recently I had been trouble shooting equipment in the NASA Center Director's office. I had walked into the office happy as ever about my job when the Center Director dressed me down without ever saying a word. There were daggers in his eyes at my shorts and scraggly long hair. I recognized the Marine Corps officer and training of a former space shuttle commander.

In his world view, your appearance directly corresponded to your quality of work.

Not one word was exchanged, however I could see his displeasure. To a certain degree, I was representing the work force of HIS space center.

I found all this to be quite funny-the very attitude not cared for by my superiors when I was in the USAF.

I had shorts on, well because Florida is Hot. 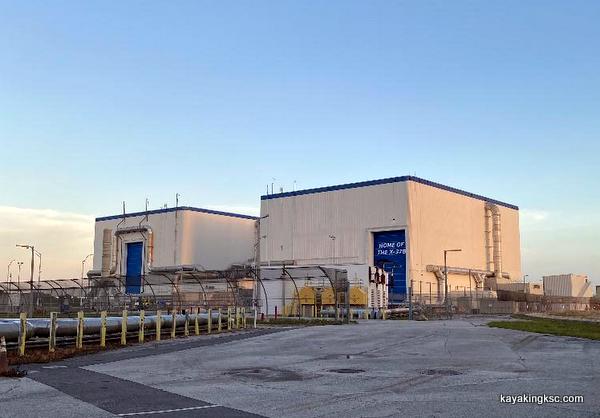 (Former Space Shuttle hangers, now home to a Top Secret space plane, that I will not mention, despite the name being painted on the south door)

To get to the OPF roof we climbed an exterior ladder.

I stepped carefully off the ladder searching for terns; recalling the vast tern rookery with little spotted eggs on the roof of the Imax theater at the Kennedy Visitor Center.

When I stepped off the ladder to my dismay my hands were covered in grease.

Someone had recently greased the safety climb on the ladder to the OPF roof-a safety feature that everyone who was not scared of heights 'despised', To use the climb required a special harness that made a climber hug the ladder while climbing, in a utterly un natural fashion however if your were hooked into the safety feature you could never fall more than one ladder step. Ignore the five minutes hanging on the edge to unhook the 'safety climb'

However I as I stood upon the roof I was disgusted at the heavy grease that layered both of my hands.

In desperation I searched the roof for a rag or anything I could have wiped my hands with. A dead roof buzzard would have been useful.

To my relief I spotted a rag on the roof and eagerly wiped the brown grease off my hands.

The rag was rather unusual:

And I spread the rag apart ignoring my grease stains I was rather horrified to realize I was holding in my hands someone's suit jacket!

At my feet was a briefcase!

Ah.......The realization of what I had just done slapped at me and causing sweeping panic

Someone had removed their jacket after the climb to the roof and then removed the extra layer of clothing and folded it very neatly on their briefcase.

Florida is after all a very hot place.

As silly as it sounds now, I had a premonition that was I holding the center director's fouled jacket. (I guess that dagger eye dress down had affected me more than I wanted to admit)

To my shame; a wave of panic washed over me and I dropped the jacket and ran to the ladder, exiting the roof as judiciously as possible. I was past the OPF security guard and to my NASA truck in minutes. A second shift tech would have to trouble shoot the OPF roof. I would be avoiding the "Orbiter Processing Facility" for a little while.

Ok I tell this story often. It is funny. However I do consider this a great flaw of mine that in a fit of panic I fled without offering compensation for ruining someone's jacket. I should have stayed on that hot roof, sweating from both Florida sun and my stupidity to find the owner and at the very least offered an apology.

The fact that of all the stories of the space shuttle program, two stand out. The dressing down by the center director and the personal guilt of me fleeing the OPF roof.

In conclusion just imagine if the celebrated marine officer and shuttle pilot had walked around a corner of the OPF roof to see me wiping greasy hands on his expensive jacket!! ---Now that event would have been story worthy! And Florida may really gotten hot as the officer chased me around the Orbiter Processing Facility roof!

At the end of the Space Shuttle program OPF-1 & 2 were closed following Atlantis's last rollout and turned over to Boeing to refurbish the X-37B super secret robotic unmanned spacecraft.

OPF-3 has been painted with a giant mural & turned over to Boeing for their CST-100 spacecraft.

Atlantis was moved to the Kennedy Space Center Visitor Complex on November 2, 2012. Please go see her!

Endeavour  is currently at the California Science Center.