One of ten thousand paintball stories........

Well the space shuttles are retired but a dedicated team of current and retired space center workers still get together to play the big 24 hour paintball games.

"Ship of Fools" is the new team name however there were a mixed bag of uniforms from past teams of the Space Center.

In the following story I was wearing my old "Marshall Law" jersey.

Our team was a mixed group of players from the old Orbiter Processing Facility (OPF 1 & 2 and OPF-3, NASA engineers, pad rats & KSC security. Many were patrons of Space Coast Paintball.

Filling in the teams ranks were the new people of the space center: college grads from Firing Rooms 1, 2, 3 & 4. (Odd music tastes but fearless in the paintball realm) 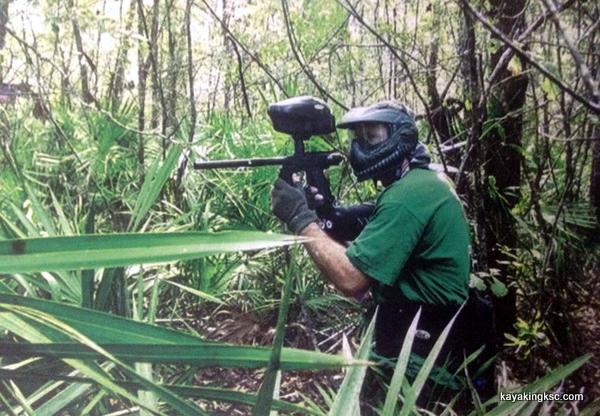 What can one do against many?

The noon horn sounded for the 24 hour scenario game to start and around 140 players on our side surged forward; my Space Center scenario teammates were nowhere in sight.

Not even on the field yet.

So at slow run, I wove my way through palmettos for the left side of the field.

For this Paintball game the two sides wore either a yellow or green arm bands to identify your teammates & opponents.

When the game began -nearly all of the “Yellow” team headed up the center leaving our left lightly guarded. Actually lightly guarded was "me" I was holding the right flank.

I had not playing the right side. I was itching for some quick action up the center. However realized NO ONE was watching our right; I changed plans.

A few minutes later I reached the far side tape line; a sloppily hung 16 foot high net that curved away in a sweeping arc. 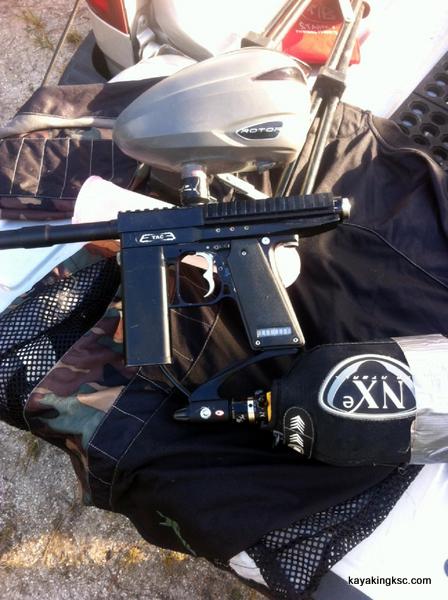 Scanning the tape line through the netted arc; much to my surprise the “Green” team had already reached our flank!

The Green team must have had their fastest sprinters run at top speed to reach this deep into our part of the field.

Luckily I tagged the first two runners before they even knew I was on the tape line.

However unknown to me, I was now blocking a major push up the tape for a surgical strike to capture the Yellow base.

Through the net I could see many more Green players making their way down the tape and I settled in to a fold in the net, exchanging fire while efficiently blocking our tape line and temporarily stalling the push towards our base.

As long as the Green players stayed along the net line, I would only have to fight one player at a time.

Of course eventually I got tagged in the hopper and put my gun up walking towards the rear.

By sheer luck I had ended up fighting on the right side really close to our teams "re insertion point" -where you reenter the game after getting shot.

For this particular 24 hour game, the rules were “Instant re-insertion” once you tag in at the re-insertion gate. (Some fields make you wait 15 minutes before re entering the game.

So not caring about hits, (pain) & enjoying the hell out of the fight --I took major advantage of the nearby re- insert gate, aggressively attacking the oncoming players.

Leaving when hit, but quickly returning & becoming a thorn in the other team’s backside.

I played the net line, standing up and darting between the numerous wrinkles and folds and of course standing next to a net I could see through it.

When one of the oncoming front players would turn their heads, I would bunker them, (paintball talk for charging up close) and consequently this move would expose me to paintballs from a lot of players.

I was hit every time I bunkered someone but would almost always tag out at least one, sometimes two Green players.

I had a short walk back to re insertion however they had at least a 200 yard stroll to their side of the field and re-insertion. Still I was pushed back. But their attack had stalled. The yellow base saved by one aggressive yellow player.

Slowly a trickle of Yellow players drawn by the noise of the action joined me on the right side. And some Yellows were covering the jungle away from the net guarding for a sweeping action that the green team should have done at the beginning of the fight. (Rook jumps over Bishop)

For my enjoyment they had continued to charge directly at me.

However most of these Yellow players were playing “normal”, (that is hiding and shooting from the back) and in general falling back, intimidated, scared & out numbered. (I'm not disparaging them, often 'normal' players are simply very young & intimidated by everything paintball)

At least they kept the other team from flanking us & kept up steady fire to keep the greater number of players from overrunning us.

Moving up the net line I would gently push these timid players out of the way mumbling “Excuse me, please don’t shoot me in the back” and sprint forward to another net wrinkle.

Finally after about my 8th bunker attack and subsequent elimination, the fight for the right tape line stalemated. It could have been that their aggressive players had been shot by "someone" or even that they were running out of paintballs.

For whatever reason the fight stalled with the other side gaining possession of a large oak tree, occupied by two players and a medic.

(For those unaware of how the big paintball games are played; both sides are awarded a certain amount of "Medics" who wear white arm bands and can place players back into the game after recording an identification number and wiping the paint marks)

These three Green players could not be eliminated. The fact that they would not leave the game after getting tagged with bright yellow splotches indicated they had a medic with them.

I managed to tag them a few times and the hidden “unseen” medic would just put them back in the game.

But standing at the net fold, I had a really good view, and after a while I became convinced that they did not actually have a medic; as I could never see a white arm band nor observe one of the players going through the required “medic” motions. (see scenario game rules)

Soon I was convinced these three were just ‘playing on’ cheating you could say, while claiming they had a medic, and wiping my hits.

So, well I got pissed.  It had been a great fight and perhaps I was getting worked up or just tired. So there was flare up of anger if they were cheating.

Time for a bunker move. Up close and personal. Or sort of…….   As I got marked again before I could act.  So returned to the re-insertion gate and tagged back in.

My next bunker attack, I shoved past our wimpy players, pushing them out of the way and charged the tape line Again (9th time) (yeah, I was showing off to the wimps)

Regardless, I was determined If it took 20 charges, those three players were going to be tagged.

I charged the oak tree emplacement at a slight angle, hoping they not just would not shoot me down right away and then curved out into an open area to get the angle for a good shot.

Well I got long balled from a player way in the back. I knew I was hit again, but I was pretty sure the ball did not break.

Still I stopped, dropped to my knees, and called for a “Paintcheck” from one of the nearby referees hugging a net fold for protection.

It just so happened that I ended up dropping to the ground, nearly parallel with the three oak tree players and only 20 feet away!

The Referee ran over to check me and during this process I never took my eyes off the players behind the oak tree, (all three had their full bodies exposed to me) and not one of them had yet looked over to see me kneeling in the open.

The referee completed his inspection for broken paint and yelled out “Clean player!” (The ball that hit me had bounced.)  I knew I only had seconds, before I would be tagged again, kneeling and exposed out in the open……. The ref had barely called me clean, when I brought up my shocker and as fast as I could fire, dropped multiple shots on all three hidden players.

Satisfyingly bright yellow splashes broke across the backs and legs of the three Green players.

However the first player, with at least four broken shots across his body, brought up his Tippmman and shot me 3 or 4 times, and I loudly called myself hit, before I took anymore collateral damage.

Then all three players stood up, guns in the air and walked out calling “Hit” and I was not really surprised to see that none of the players had the white arm band that signified a “medic”.

Still kneeling and slightly out of breath, I cheerfully called “Good shot player”!

But I had an evil laugh under my dripping mask. “Take that you wipers”, I thought. Laughing, I stood up slowly and walked back to our re-insertion point and tagged back in the game.

Was still laughing, when familiar jerseys arrived on the scene.

My KSC scenario teammates, finally showed up to push the tape line. (They had been waiting for a mission assignment from our general)

My fellow team members eyed my paint stained jersey and mask, asking “Anything happening over here?”

“Not a dam thing…. “ I said, following them to the front.